Polar mesospheric clouds over the Ukraine

Astronauts aboard the International Space Station, flying at 350 kilometers (220 miles) up, are ideally placed to observe elusive polar mesospheric clouds. 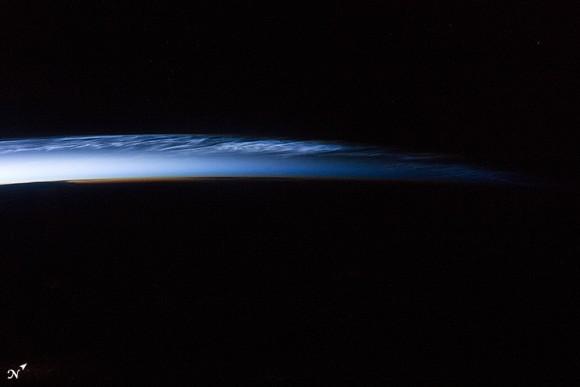 This sunset shot shows polar mesospheric clouds as a thin bright line, far above the troposphere, which is the lowest layer of Earth’s atmosphere and the part of the atmosphere in which we have our weather. Image via NASA

Polar mesospheric clouds are wispy and elusive. They form 80 to 100 kilometers (50 to 60 miles) above the ground – far higher in the atmosphere than most ordinary clouds. Astronauts aboard the International Space Station (ISS), flying at 350 kilometers (220 miles) up, are ideally placed to observe them. ISS astronauts shot the two photos on this page on August 1, 2014 as ISS flew over the southern Ukraine. 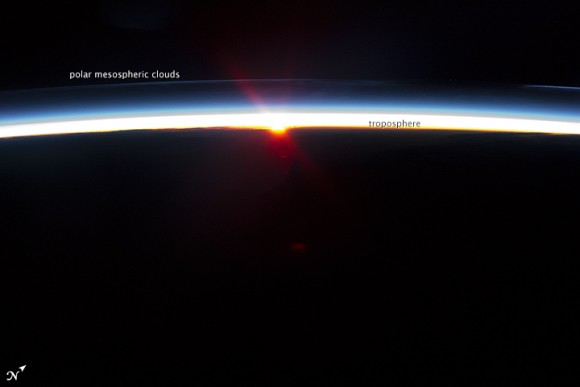 Looking away from the setting sun, polar mesospheric clouds make a spectacular display. They are extensive enough to give a sense of disappearing into the distance, and thick enough to reveal fine details. Image via NASA

Polar mesospheric clouds typically appear only near Earth’s poles, but during the past few decades they have appeared as far south as Colorado and Virginia. The clouds also have become brighter and thicker. Scientists think the changes are related to long-term climate change, perhaps from increasing water vapor content in the upper atmosphere.

Find out more from NASA