Venus will soon pass more or less between us and the sun, at what astronomers call inferior conjunction. That’s why this inner planet is now waning in phase. 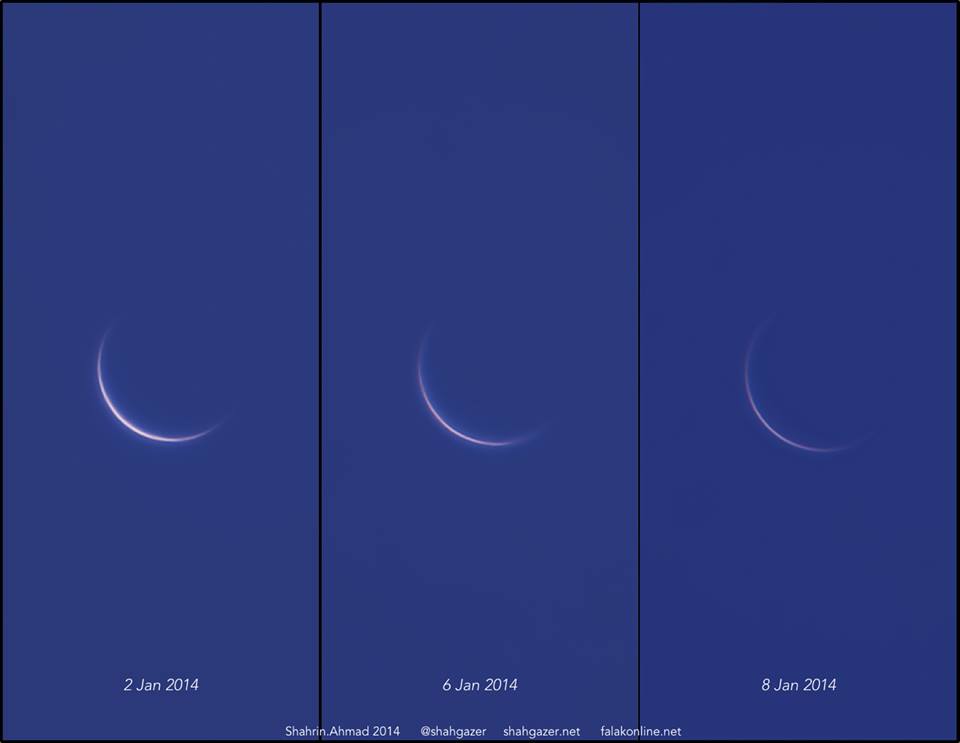 Shahrin Ahmad captured this series of images of a waning crescent Venus from January 2, 2014 through last night (January 8). He wrote on EarthSky’s Facebook page:

Here is a compilation of 3 different dates, starting from 2nd Jan (left) when Venus is at 3.2% illumination, and ending on 8th Jan (right) at 0,7% illumination.

Very interesting to see how fast it changes in just within 5 days!

View larger. | Shahrin Ahmad captured this photo of Venus on January 9, 2014. Here is it only two days away from inferior conjunction on January 11, when Venus will pass 5 degrees N. of the sun as seen in Earth’s sky. Afterwards, Venus will return to the eastern sky before dawn.

Shahrin Ahmad captured the photo above today (January 9, 2014). He was trying to capture what astronomers called the horns of Venus. That is, at inferior conjunction, the horns of Venus’s fading crescent can join tip-to-tip to form a complete circle – the result of sunlight trickling through the upper layers of Venus’s cloud cover. He wrote:

Today, 9 Jan 2014 at 0215UTC, with Venus shining at only 0.5% illumination, I wanted to see if there is any traces of the horn-shape crescent. I pushed the processing as much as possible, brightening the dark areas, without getting any artificial artifact.

The initial results seems to show that the crescent shape does extended well beyond 180 degrees around the limb.

It would be interesting to see if tomorrow will yield clearer results.

Why are we seeing Venus wane in phase now? Recall that Venus orbits the sun one step inward from Earth. It is about to pass between us and the sun (actually, 5 degrees N. of the sun as seen on the dome of Earth’s sky) on January 11, 2014. The daylight hemisphere of Venus is facing almost entirely away from us now. As we gaze toward this planet, we are mainly seeing its night sky.

EarthSky guide to the visible planets