Venus tried to kiss Mercury, but Mercury got away.

The arrows through the planets show their motion over 5 days, relative to the starry background. More charts like these in Guy Ottewell’s Astronomical Calendar 2016.

Story and charts by Guy Ottewell

Valentine’s Day morning is toward the last for seeing the two inner planets together as they stoop toward the sun.

Venus tried to kiss Mercury, but Mercury got away. Both are sliding down eastward; Venus was sliding faster, until the moment (February 13, 2016 at 3:00 Universal Time) when the gap between them reached a minimum of 4 degrees. So this was an appulse (closest approach) without a conjunction, because from then on Mercury has increased its apparent speed, and the gap widens. Again a spatial diagram helps to make these relative movements clear:

Venus is still 29 degrees from the sun, and about 6 degrees above the horizon at the time of our scene. Perhaps you can make a sketch at the telescope.

… but if your sketch looks like this you’re using the wrong eyepiece; her actual shape, far around the back of sun, should be small and fat, almost a circle, as shown on the chart below. 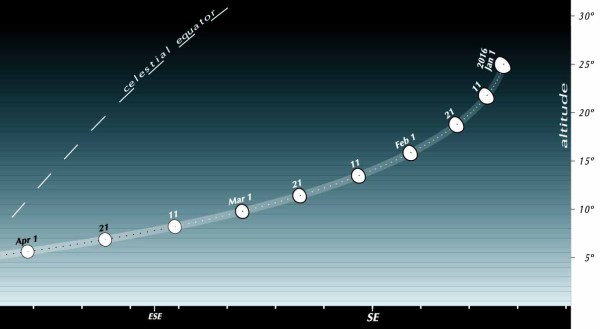 Bottom line: Venus and Mercury before dawn, by Guy Ottewell, author of the beloved Astronomical Calendar.