EarthSky community photos of dazzling planet Venus and the moon – with fainter Mars nearby – on the nights of March 21 and 22, 2015. 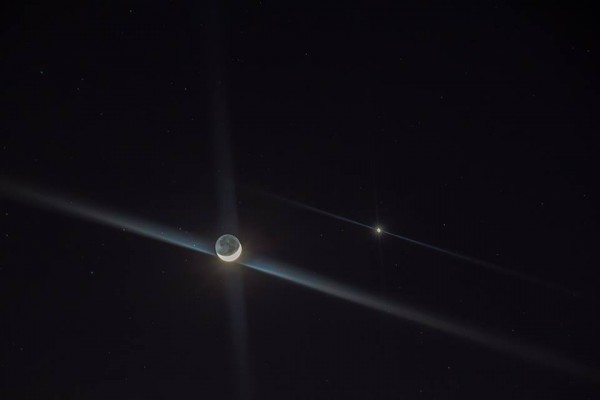 Eileen Claffey posted this at EarthSky Facebook on March 22, 2015. She wrote, “”Moments ago from Central Ma., Moon and Venus from my somewhat frozen lens on this frightfully frozen spring night. Still smiling.” Thank you! 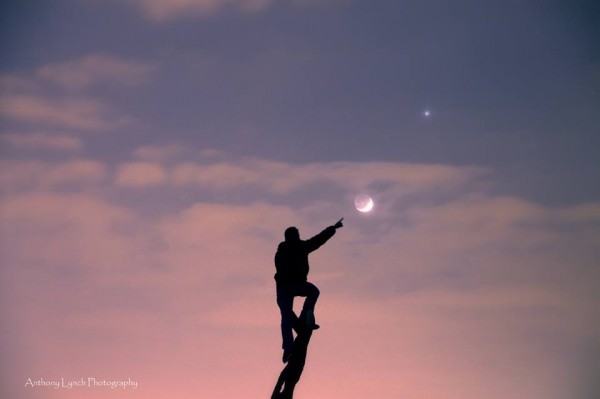 Anthony Lynch posted a whimsical shot of the March 22 moon and Venus at EarthSky Facebook. 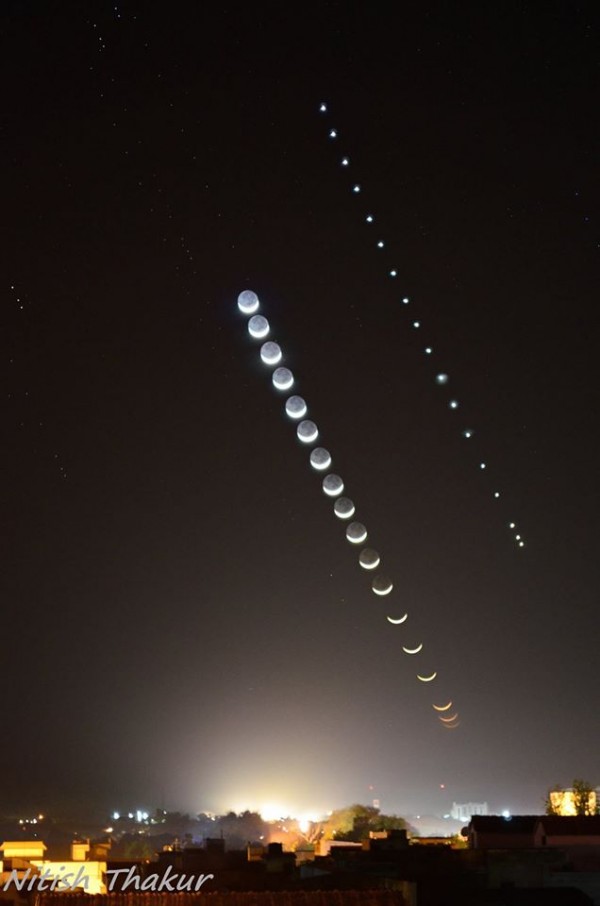 Nitish Thakur in Jhansi, India created this beautiful timelapse of the moon and Venus on March 22, 2015. 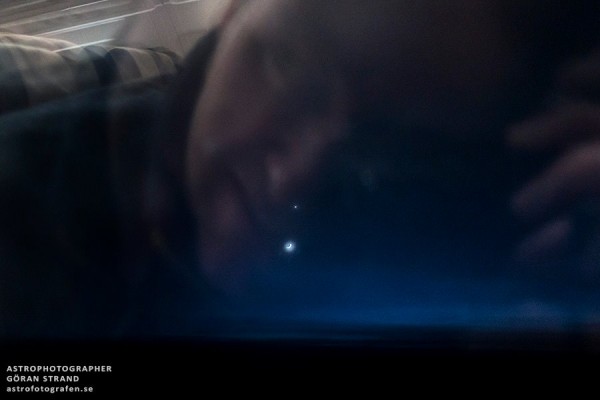 Fotograf Göran Strand of Sweden wrote: “Last night when I flew back home from the Faroe Islands I had the most beautiful outside my airplane window. A crescent moon and planet Venus conjunction that was with me for a great deal of the trip. So here’s my first ever moon/Venus selfie … through the airplane window at 10,000 meters (30,000 feet) above the ground.”

Thanks to all of you who posted at EarthSky Facebook and Google+, and you who submitted directly to EarthSky! We love all your photos and can publish only a few. Help EarthSky build a new community website in 2016 – and see more of your photos online. 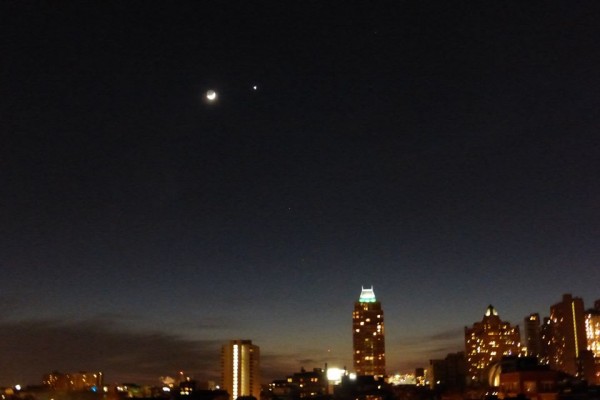 Venus and moon March 22, 2015 from Linda Sturgess in Philadelphia, Pennsylvania. 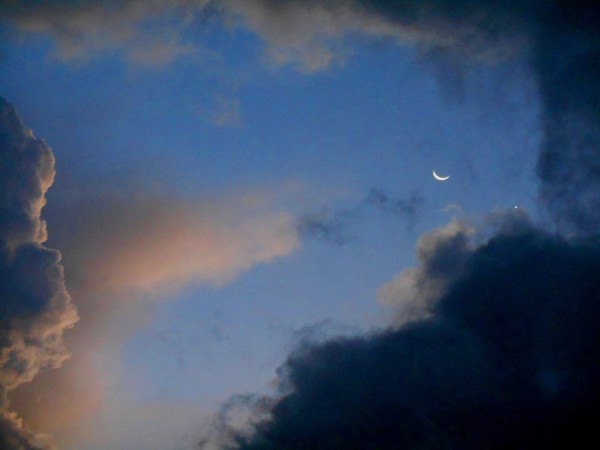 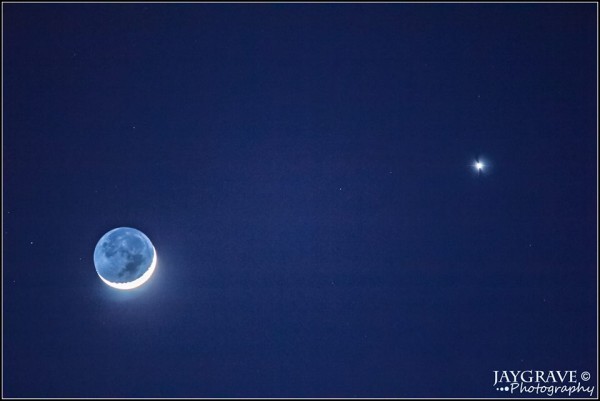 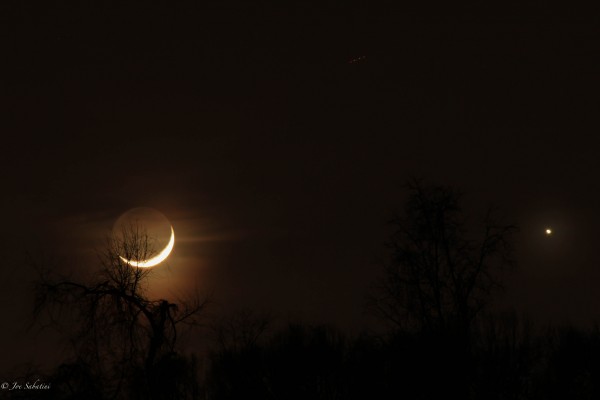 Venus and moon March 22, 2015 from Joe Sabatini in Levittown, Pennsylvania. 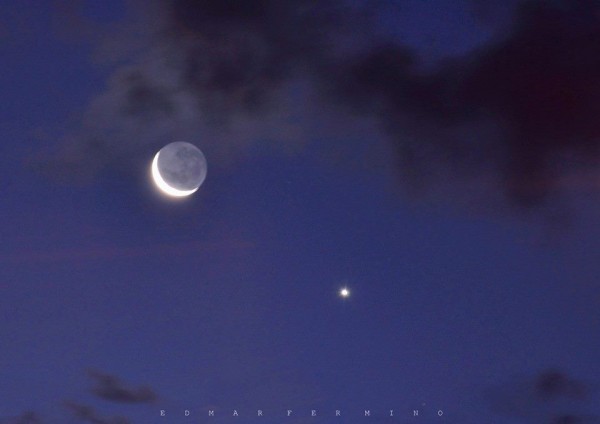 Venus and moon March 22, 215 from Edmar Fermino in Brazil. 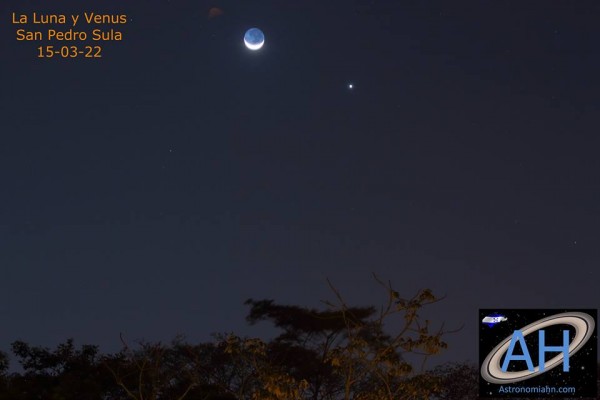 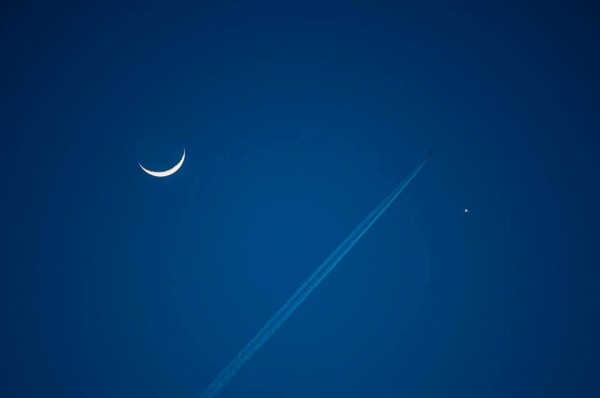 Roy Chandler wrote, “Moon and Venus over Albuquerque NM this evening 3/22/2015 interrupted by Southwest Airlines Flight 4091 from Phoenix to Detroit.” 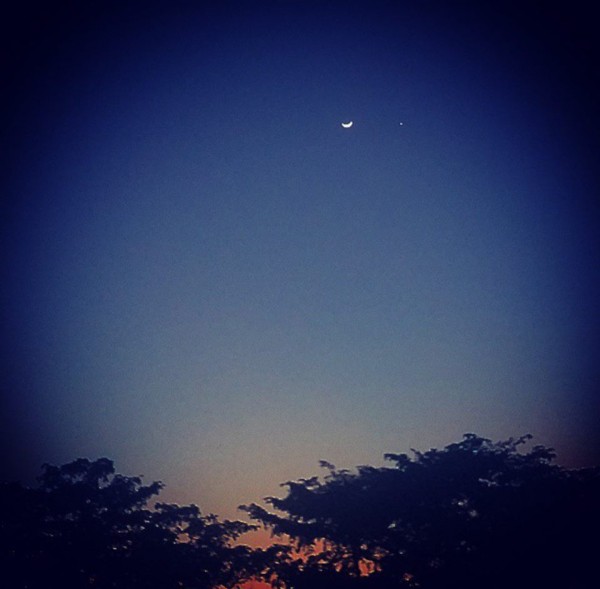 We loved this simple shot (mobile phone?) from Jay Alex in Florida, of the March 22 moon and Venus. 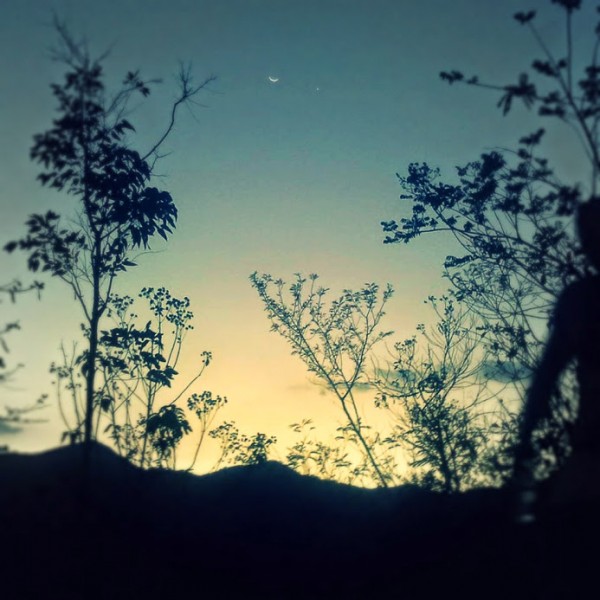 Venus and moon on March 22, 2015 from Manuel Bump in Valencia, Venezuela. Manual posted to EarthSky Photo on G+. 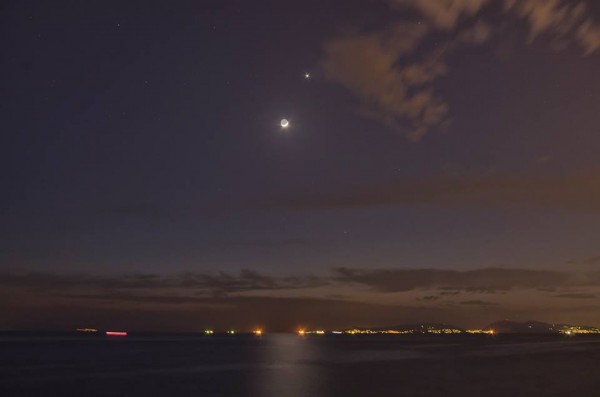 Nikolaos Pantazis caught the moon and Venus over the Saronic Gulf in Greece. 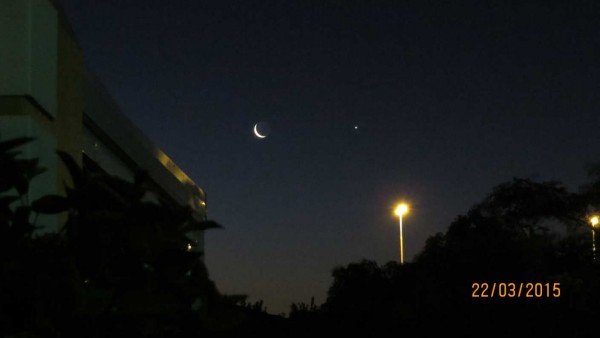 Brian Tribelhorn near Cape Town, South Africa saw the moon and Venus nearly side by side on March 22, 2015. Thanks for posting, Brian! 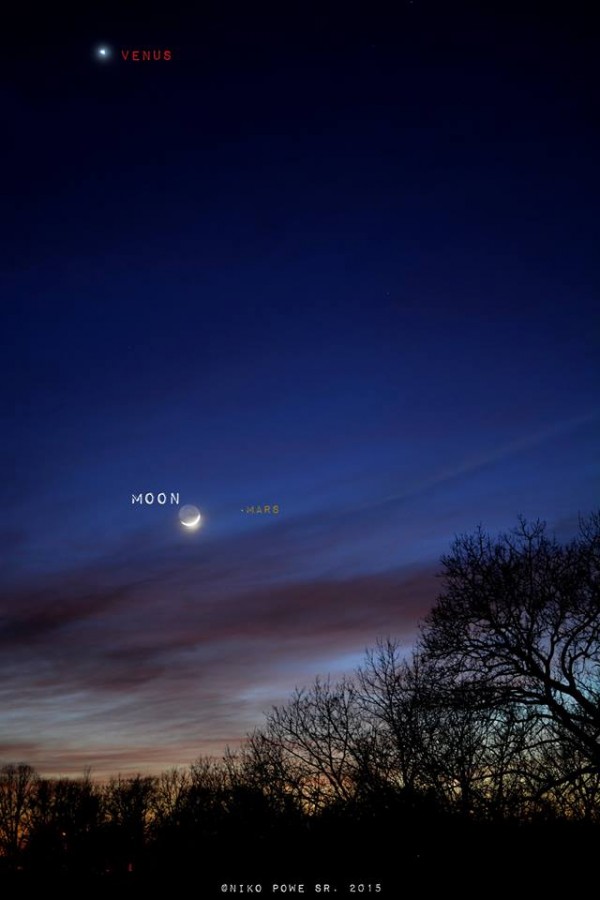 Niko Powe in Kewanne, Illinois was kind enough to label the view of last night’s moon, Mars and Venus extravaganza. Thanks, Niko! Catch them Sunday night, too! 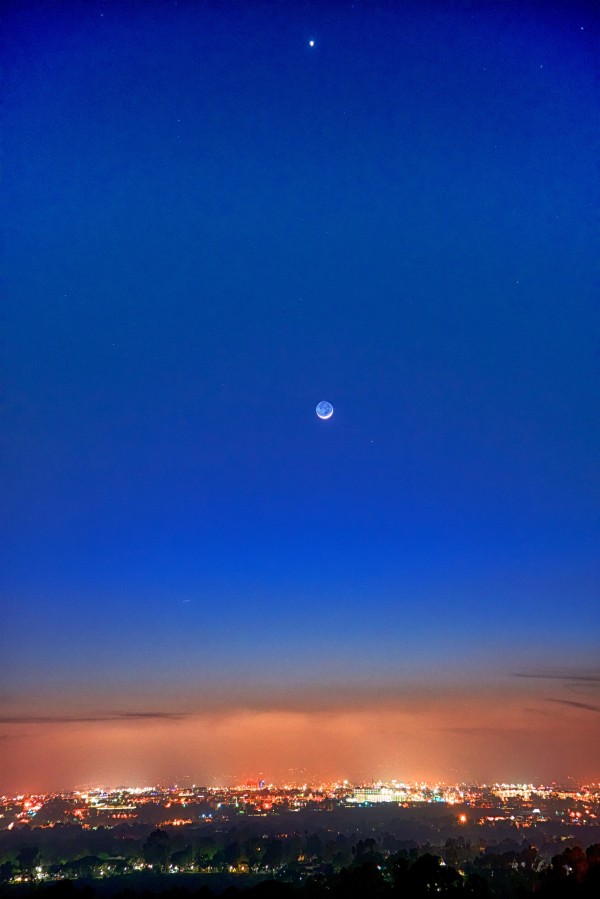 Jim Hatcher caught Mars next to the moon – and Venus above – on March 21 from San Diego. 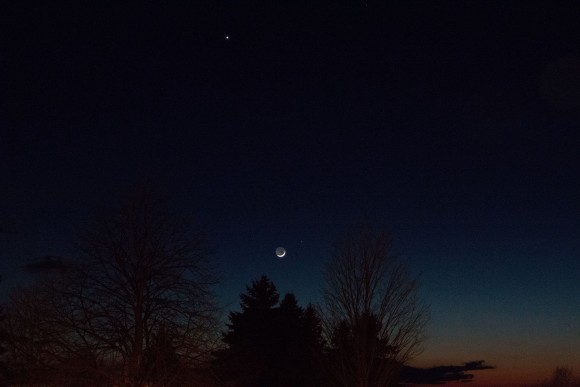 View larger. | Here are the very young moon to the upper right of Mars, with bright Venus above, on Saturday night – March 21, 2015. Why is Mars in a different position with respect to the moon in this photo than in the photo above? It’s because, in the hours that passed between sunset on the U.S. east coast and sunset on the U.S. west coast … the moon moved in its orbit around Earth. Photo submitted by Charles Murphy in Oswego, NY. Thanks, Charles! 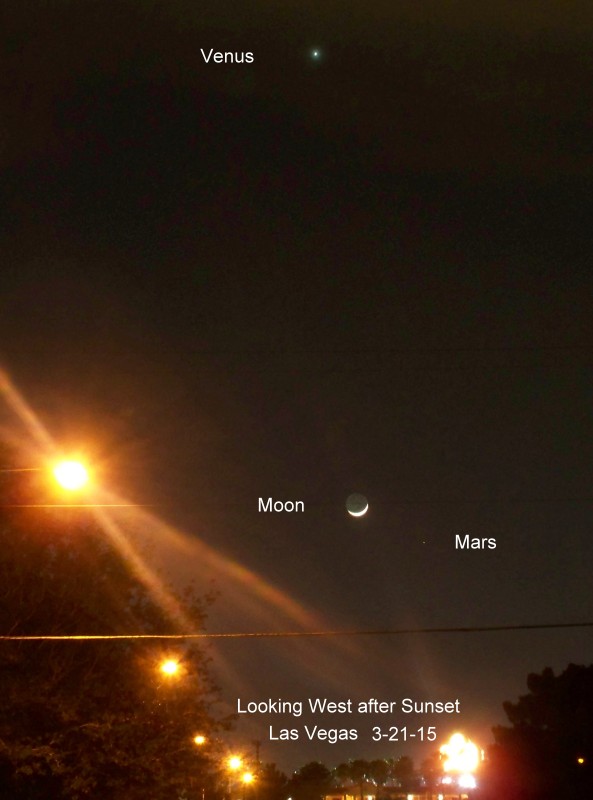 Robert Kelly in Las Vegas, Nevada caught this shot with a little Kodak Easyshare ZD710. Isn’t it cool? Thanks, Robert! 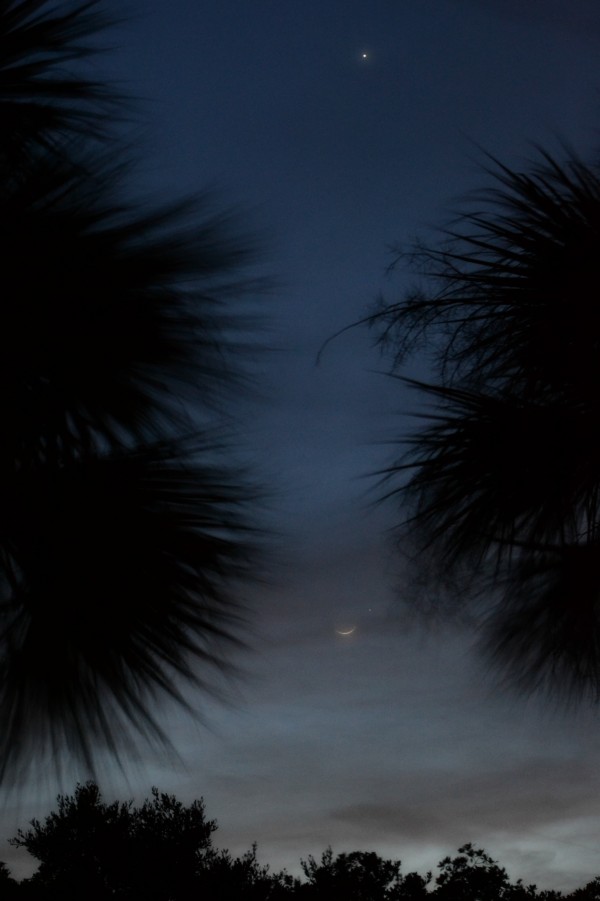 KKing caught the planets and moon (Mars is upper right of moon) on March 21 from Englewood, Florida. 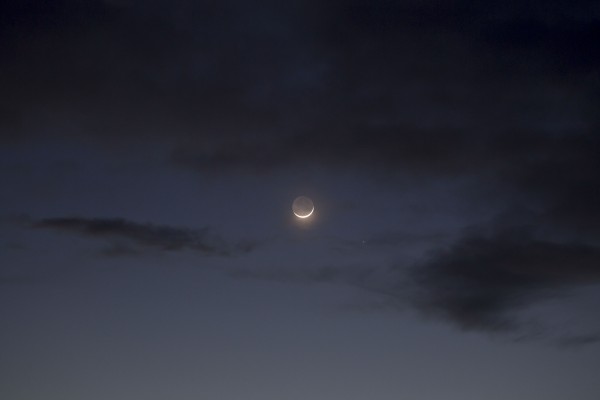 Moon – with planet Mars to its lower right – on March 21 from Michael Reagan in Bullhead City, Arizona. 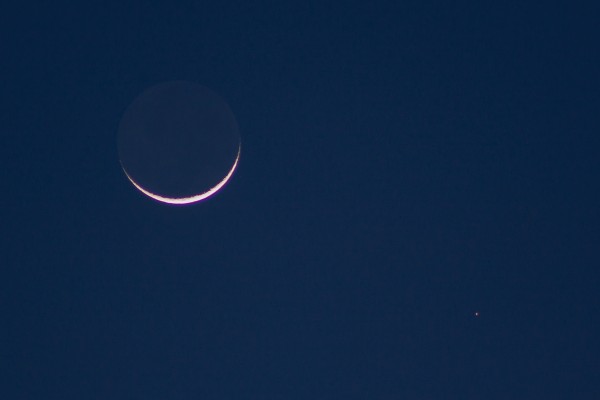 The moon and Mars on March 21 from Hector Barrios in Hermosillo, Mexico. 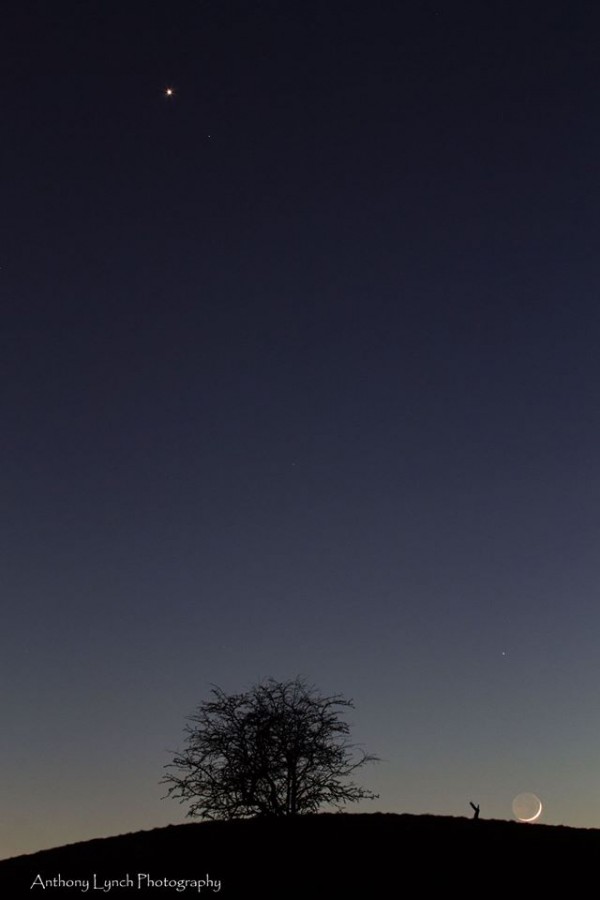 Venus (top of photo) and the moon (Mars had already set) from Dublin, Ireland by Anthony Lynch Photography. Thanks, Anthony!