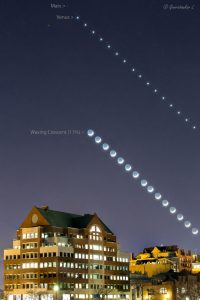 I couldn’t resist the super clear skies over NYC last night. This is a 16 image composite of the new waxing crescent moon (11%), Venus and Mars taken 4 minutes apart. This is my first composite of multiple celestial bodies and it was such a heart-warming experience to see while making the composites, how aligned are the paths of Venus & Mars which is the Celestial Equator.

Thank you! Your submission has been received!
Oops! Something went wrong while submitting the form.
END_OF_DOCUMENT_TOKEN_TO_BE_REPLACED