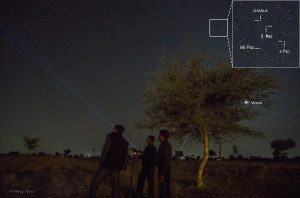 In this image you can see Venus shine through the ‘Babul’ tree in local language taxonomic synonym Acacia nilotica, a native of this dry semi arid climate.

Some curious locals I befriended who were enthusiastic to share folklore of the constellation Orion were in conversation when I included them in the picture. I realize, curiosity and awe of the night sky is a common denominator across people from all walks of life… and that is such a wonderful thing!

Thank you! Your submission has been received!
Oops! Something went wrong while submitting the form.
END_OF_DOCUMENT_TOKEN_TO_BE_REPLACED