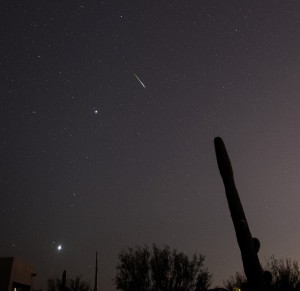 Eliot took this during the peak of the 2015 Leonid shower and said it was a Leonid, but I’m not sure. It doesn’t appear to be radiating from the Lion’s mane, which is above Jupiter in this pic.

Thank you! Your submission has been received!
Oops! Something went wrong while submitting the form.
END_OF_DOCUMENT_TOKEN_TO_BE_REPLACED