Alignment of Venus, Mars, Jupiter and a meteor on the ecliptic plane. Not a large meteor but a little gem of color. 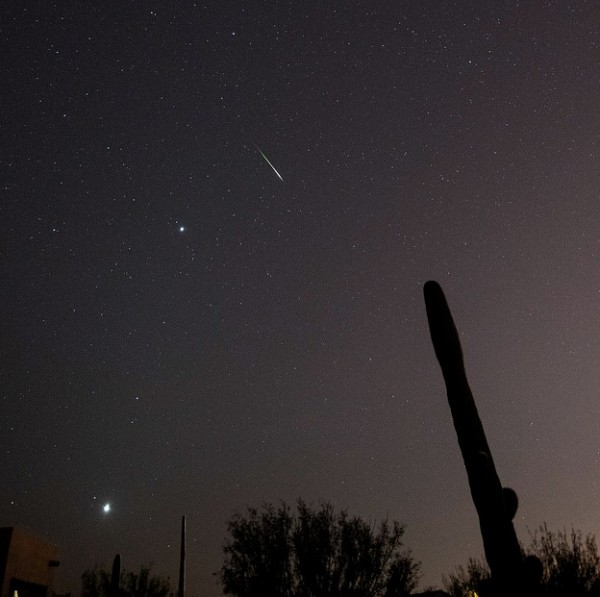 By all reports, the Leonid meteor shower was sparse in 2015. We did receive this interesting photo, from Eliot Herman in Tucson. It’s an apparent alignment of three planets with a meteor. The planets are brilliant Venus closest to horizon, bright Jupiter closest to meteor, faint reddish Mars about a third of the way from Venus to Jupiter. The little star right next to Venus is Porrima in the constellation Virgo. The faint star just below Mars is Zaniah, also in Virgo. The faint star near Jupiter is Sigma in the “tail” of the constellation Leo the Lion. Eliot wrote:

Not a large meteor but a little gem of color.

Photo was taken with a Nikon D800 with a 16-35 mm VR lens at 18 mm F4 3200 ISO 10 seconds exposure. The camera was mounted on an iOptron cubePro drive with the alignment on Regulus. The RAW image was adjusted with Photoshop CC.

By the way, we’re not 100% sure this is a Leonid meteor. In order to be a Leonid, it would need to be radiating from the “mane” of Leo, which is just above Jupiter in this photo, along the same line as the planets (the line of the ecliptic). Does the path of this meteor trace back to the Lion’s mane? Maybe. Maybe not. It’s hard to tell sometimes in a photo. We’re still getting photos of Taurid meteors, and a minor shower, the Monocerids, and others are going on this week, too.

Thanks for sharing your image with us Eliot!