Venus is a crescent now

Venus will pass between the Earth and sun on August 15. So its day side is turning more and more away from us, and Venus appears as a waning crescent. 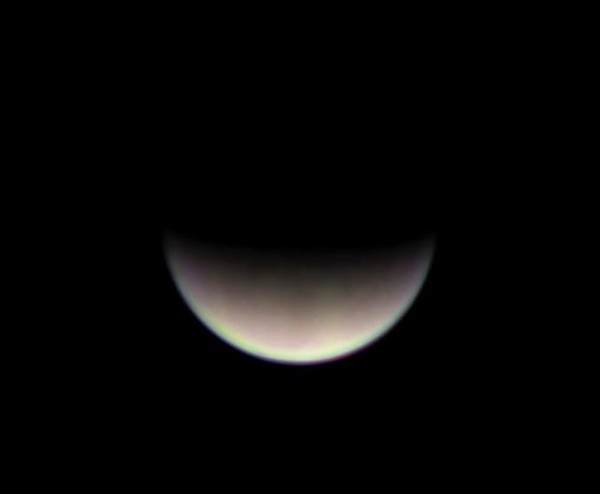 You know Venus is the brightest object in the west after sunset. Yes? It’s the sky’s brightest object, with the exception of the sun and moon. And you know that Venus and the sky’s second-brightest planet, Jupiter, are drawing closer in the west after sunset? If not, look here for a chart showing them tonight. But did you know that, if you looked at Venus through a telescope now, you’d see it in a crescent phase? Efraín Morales of the Sociedad de Astronomía del Caribe captured this telescopic view of a crescent Venus on June 11, 2015.

Venus is a crescent now as seen from Earth because it’s now about to gain a lap on Earth in the never-ending race of the planets. Venus will be most nearly between the sun and Earth on August 15. No spectacular transit of Venus this time; it’ll be passing 8 degrees south of the sun as viewed in Earth’s sky.

But there’s something spectacular you can see this week! Beginning tonight – and through this weekend you might catch the very thin crescent moon below Venus and Jupiter in the west after sunset. Here’s a collection of charts showing the moon and planets tonight and in the weeks to come.

Watch for the moon to move up past the bright planets Venus and Jupiter – and the star Regulus in the constellation Leo the Lion – from about June 19-21. 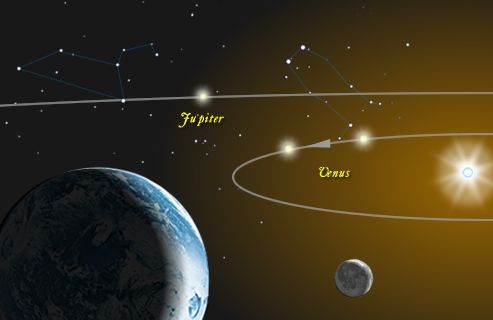 Here’s approximately how Venus and Jupiter would look now if you could view them from a larger perspective. Not to scale. Chart via Jay Ryan at ClassicalAstronomy.com. Used with permission.

Bottom line: Venus is now the very bright object in the west after sunset. If you looked at it through a telescope, you’d see it in a crescent phase. Photo of crescent Venus on June 11, 2015, by Efraín Morales of the Sociedad de Astronomía del Caribe.