Venus in daytime on August 30

Venus appears as a crescent for the same reason the moon does. It’s because, at times like now, its lighted side – or day side – is facing mostly away from us. 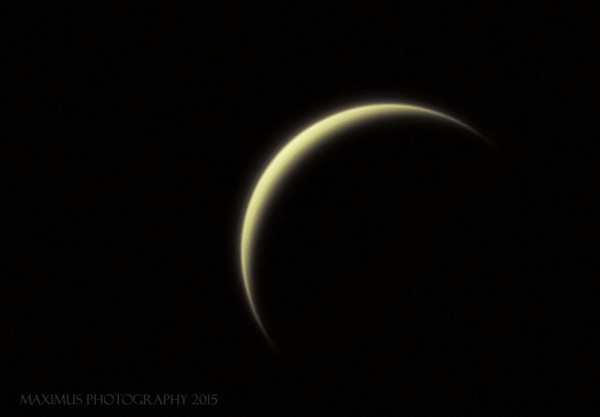 No, it’s not the moon. It’s a crescent Venus. This colorized image of Venus is by Maximus Photography.

Maximus Photography kindly granted us permission to publish his daytime image of the planet Venus, taken on August 30, 2015. He wrote:

On a short trip to Targoviste [a city in Romania], where I was hopefully going to catch the ISS in transit over the disc of Venus (transit duration: 0.02seconds!)

I had the luck of some very good seeing conditions for a short imaging session with Venus.

Unfortunately the ISS transit was a total failure due to technical problems (hard drives, focusing…) despite perfectly clear skies, and good seeing conditions.

Too bad about ISS, but the Venus image is wonderful! Thank you, Max.

Why does Venus appear as a crescent now? It’s because it recently passed more or less between the Earth and sun, in the course of its smaller, faster orbit. This inner world’s inferior conjunction, when it passed 8 degrees S. of the sun as seen from Earth, was August 15. Now the day side of Venus is still facing mostly away from us. We’re mostly seeing Venus’ night side. And thus this world appears through telescopes as a crescent, which will wax larger in the months ahead, as Venus flies ahead of Earth in orbit.

You can find Venus before dawn now. Read more about how to locate Venus. 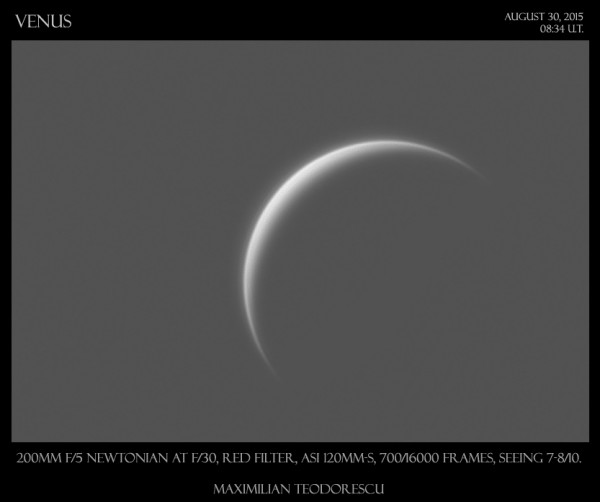 Original photo of daytime Venus on August 30 by Maximus Photography.

Bottom line: A photo of a crescent Venus in daylight by Maximus Photography. See the image and read more at his blog.