New image of the Tycho supernova remnant from the Chandra X-ray Observatory.

Tycho – first observed in 1572 – is the remnant of a supernova, located about 8,000-9,800 light-years from Earth in the constellation Cassiopeia the Queen. This latest image of Tycho, below, from the Chandra X-ray Observatory, released October 17, 2019, reveals an intriguing pattern of bright clumps and fainter areas. 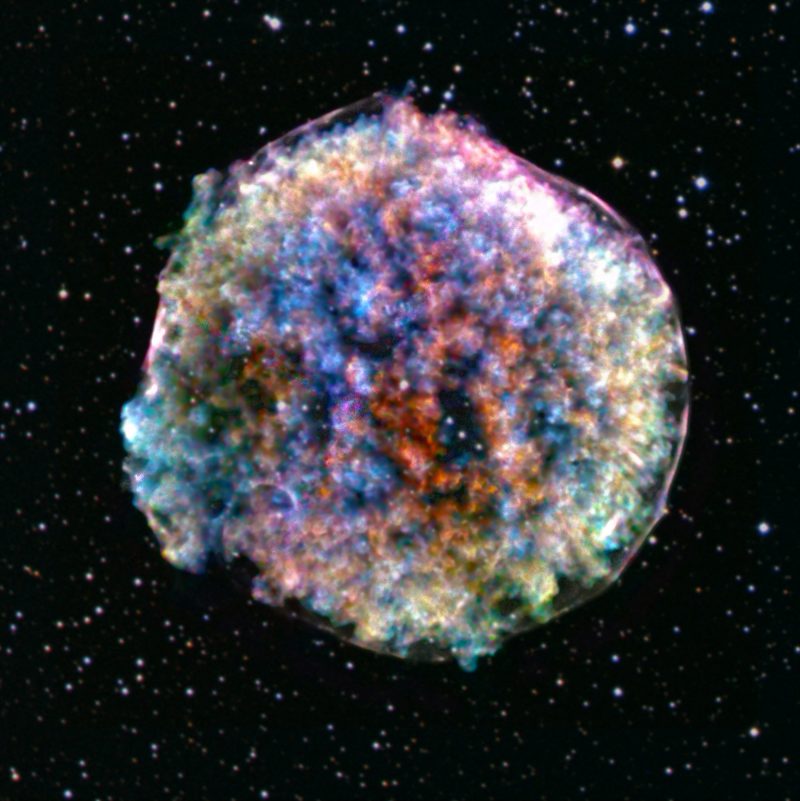 In 1572, Danish astronomer Tycho Brahe was among those who noticed a new bright object in the constellation Cassiopeia. Adding fuel to the intellectual fire that Copernicus started, Tycho showed this “new star” was far beyond the moon, and that it was possible for the universe beyond the sun and planets to change.

Astronomers now know that Tycho’s new star was not new at all. Rather it signaled the death of a star in a supernova, an explosion so bright that it can outshine the light from an entire galaxy. This particular supernova was a Type Ia, which occurs when a white dwarf star pulls material from, or merges with, a nearby companion star until a violent explosion is triggered. The white dwarf star is obliterated, sending its debris hurtling into space.

The Chandra image reveals an intriguing pattern of bright clumps and fainter areas in Tycho. What caused this thicket of knots in the aftermath of this explosion? In a study that compared Chandra data to computer simulations, researchers found evidence that the explosion was likely the source of this lumpy distribution. Read more about the study.