New Hubble Space Telescope image of a planetary nebula, created by two aging stars that have shucked off their outer layers, but still orbit each other. 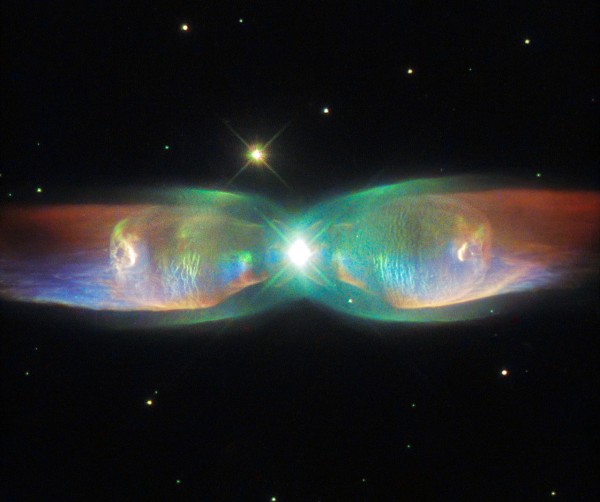 View larger. | The Twin Jet Nebula, aka PN M2-9, is what’s called a planetary nebula, formed, in this case, when the central object is not one star, but two stars. Hubble Space Telescope image via ESA/Hubble and NASA.

Did you think you knew what a planetary nebula looks like? We typically think of planetary nebula as being relatively simple shells of expanding ionized gas, ejected from old stars – stars like our sun – late in their lives. As our sun ages, it’ll become a planetary nebula, which, as you might have guessed by now, have nothing to do with planets! But our sun’s eventual planetary nebula won’t look like this object, called the Twin Jet Nebula. At the heart of the Twin Jet Nebula, there are two stars, not one. The binary star at the heart of this nebula is what creates the two iridescent lobes of material. Within these lobes, two huge jets of gas are streaming outward at speeds in excess of one million kilometers per hour.

The Twin Jet Nebula – also known as PN M2-9 – is what’s known as a bipolar nebula. This image was posted on the Hubble Space Telescope site this week (August 26, 2015). It explained:

Astronomers have found that the two stars in this pair each have around the same mass as the sun, ranging from 0.6 to 1.0 solar masses for the smaller star, and from 1.0 to 1.4 solar masses for its larger companion. The larger star is approaching the end of its days and has already ejected its outer layers of gas into space, whereas its partner is further evolved, and is a small white dwarf.

The characteristic shape of the wings of the Twin Jet Nebula is most likely caused by the motion of the two central stars around each other. It is believed that a white dwarf orbits its partner star and thus the ejected gas from the dying star is pulled into two lobes rather than expanding as a uniform sphere. However, astronomers are still debating whether all bipolar nebulae are created by binary stars.

Meanwhile, the nebula’s wings are still growing, and, by measuring their expansion, astronomers have calculated that the nebula was created only 1,200 years ago.

Within the wings, starting from the star system and extending horizontally outwards like veins are two faint blue patches. Although these may seem subtle in comparison to the nebula’s rainbow colours, these are actually violent twin jets streaming out into space, at speeds in excess of one million kilometers per hour. This is a phenomenon that is another consequence of the binary system at the heart of the nebula. These jets slowly change their orientation, precessing across the lobes as they are pulled by the wayward gravity of the binary system.

The two stars at the heart of the nebula circle one another roughly every 100 years. This rotation not only creates the wings of the butterfly and the two jets, it also allows the white dwarf to strip gas from its larger companion, which then forms a large disc of material around the stars, extending out as far as 15 times the orbit of Pluto!

Bottom line: The Twin Jet Nebula is a planetary nebula, representing an advanced stage in the evolution of a star … or in this case, two stars. This new image comes from the Hubble Space Telescope’s Imaging Spectrograph.