This image – made with a special filter – shows the outskirts of a much-studied nebula in the Large Magellanic Cloud, called the Tarantula Nebula. 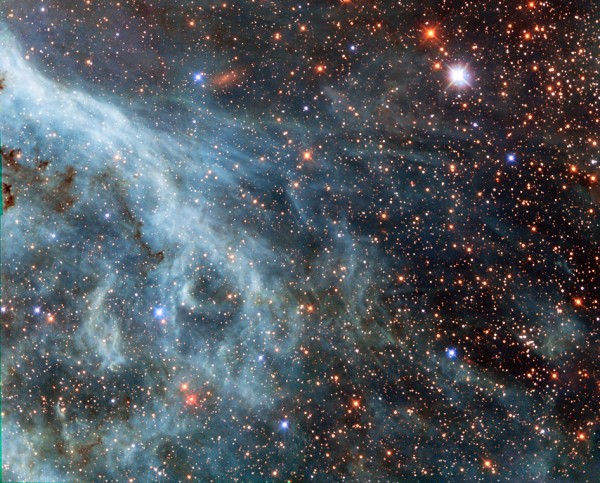 View larger. | A special filter – which lets through infrared light – shows hydrogen gas in the Large Magellanic Cloud as a mix of blue and green. Image via ESA/Hubble & NASA

The brightly glowing plumes seen in this image are reminiscent of an underwater scene, with turquoise-tinted currents and nebulous strands reaching out into the surroundings. This is no ocean, however. It’s part of the Large Magellanic Cloud (LMC), a small nearby galaxy that orbits our Milky Way galaxy, and appears as a blurred blob in our skies. This image shows the outskirts of a much-studied nebula in the LMC, called the Tarantula Nebula.

In most images of the LMC the color is completely different to that seen here. That’s because, in this new image, a different set of filters was used. The customary R filter, which selects the red light, was replaced by a filter letting through the near-infrared light. In traditional images, the hydrogen gas appears pink because it shines most brightly in the red. Here however, other less prominent emission lines dominate in the blue and green filters.