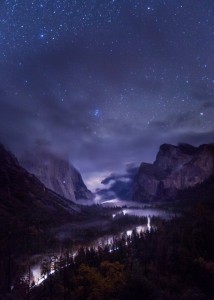 Tunnel View in Yosemite National Park provides one of the most famous views of the Yosemite Valley. From here you can see El Capitan and Bridalveil Fall rising from the valley, with Half Dome in the background. Toby Harriman snapped this photo from that viewpoint a few weeks ago on as the low fog rolled into the valley — capturing conditions he had always dreamed of. His favorite part of the photo: The climber’s headlamp that is visible mid way up El Capitan on the left. — with Toby Harriman Photography at Yosemite National Park.

Thank you! Your submission has been received!
Oops! Something went wrong while submitting the form.
END_OF_DOCUMENT_TOKEN_TO_BE_REPLACED