This photo looks west after sunset, in a darkening sky. That’s where you’ll find Venus, and hopefully Saturn. 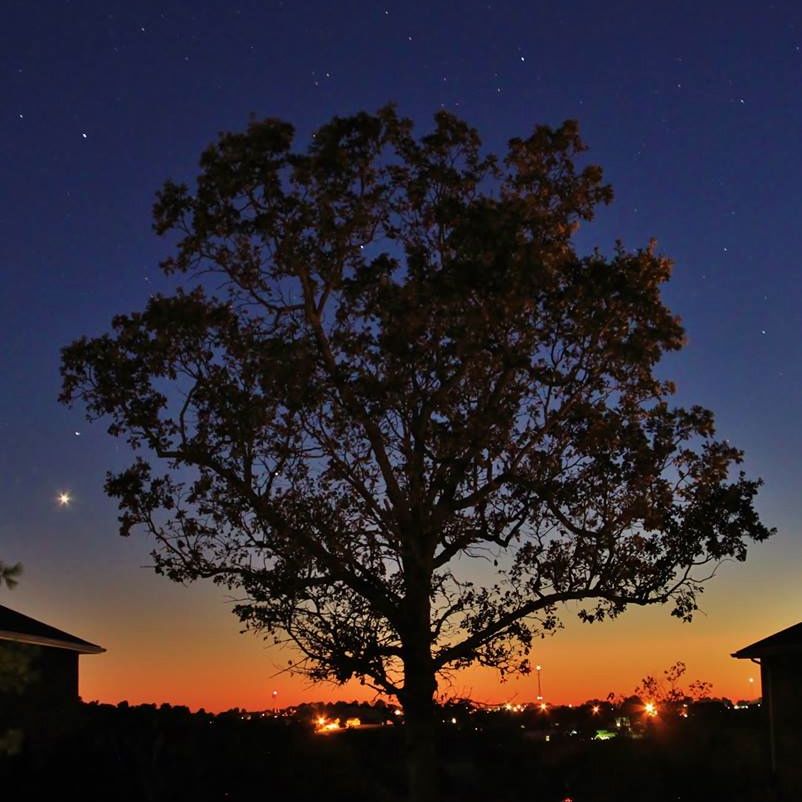 View larger. | The brightest “star” here is really a planet, Venus. The planet Saturn is to the right of Venus, in the midst of the tree branches. The star Zubenelgenubi is above Venus. Photo taken September 23, 2013 by Danny Crocker-Jensen in Wardsville, Missouri. Thanks, Danny!

We’re receiving more photos, and getting more questions, about the very bright object in the west after sunset. That object is Venus, brightest of planets. Here it is, the bright light to the left of the tree in this photo by Danny Crocker-Jensen of Wardsville, Missouri.

Remember, this photo looks west after sunset, in a darkening sky. That’s where you’ll find Venus, and hopefully Saturn.

The planet Saturn is also in this photo, but not as easy to see. Likewise, in the real sky, Saturn isn’t as easy to spot as Venus because it’s much fainter. In Danny’s photo, Saturn is to the right of Venus, within the tree branches.

The bright object immediately above Venus really is a star. It’s Zubenelgenubi, one of two moderately bright stars in the constellation Libra the Scales. Read more about Zubenelgenubi here.

If you look, depending on when you look, the stars and planets in this photo might not appear in the same configuration as your night sky. There are differences due to latitude and time of night (although you need to look as soon after sunset as possible to see Venus and Saturn). Also, over time, the sky shifts. Follow the planets with EarthSky’s planet guide – updated several times monthly.

Best photos of Venus and Saturn after sunset.