A massive, young star lies is central to this “snow angel” nebula. Twin lobes of super-hot gas, glow blue in this image, forming the angel’s wings. 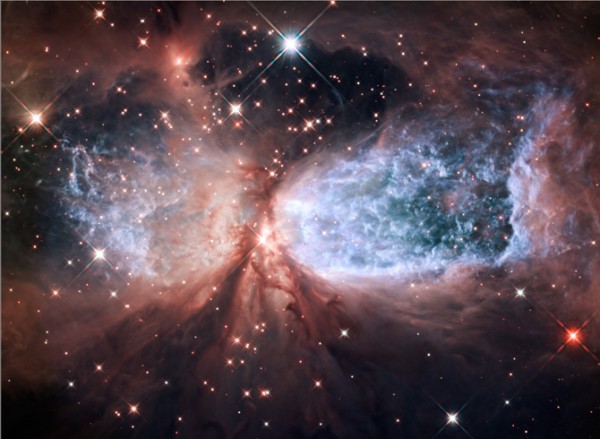 This space object is called Sharpless 2-106. Image via NASA, ESA, and the Hubble Heritage Team (STScI/AURA) Read more about this image.

This Hubble Space Telescope image, taken in 2011, shows a beautiful star-forming nebula. Astronomers call it Sharpless 2-106, Sh2-106 or S106 for short. It’s located some 2,000 light-years from Earth. The twin lobes of super-hot gas here stretch outward from a central star. The hot gas creates the “wings” of what might looks to us like a snow angel. A ring of dust and gas orbits the central star acts like a belt, and cinches the expanding nebula into an “hourglass” shape.

The whole nebula measures several light-years in length. It appears in a relatively isolated region of the Milky Way galaxy.

Read more about this image.