On a beach in South Carolina, three friends watched as the morning twilight met the Milky Way. 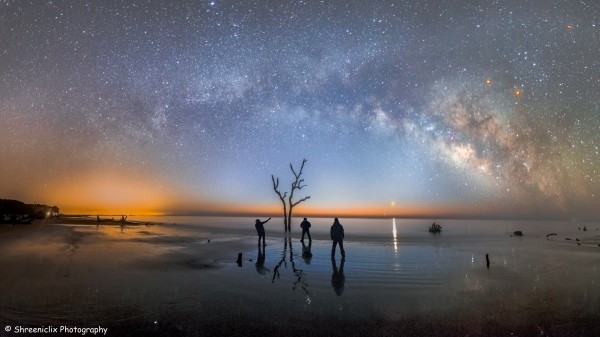 Shreenivasan Manievannan said that – with the Milky Way core becoming visible again now, he had the chance to go out and shoot. This shot is from February 13, 2016 in Hunting Island State Park, South Carolina. He wrote:

Two of my friends (city dwellers, new to dark sky) along with myself went to watch the Milky Way rise around 2:30 a.m. and eventually watched the twilight colors meet with the Milky Way, making a nice arch over the lone standing tree in the South Carolina beach.

As a bonus, we got to see the five planets – Mercury, Venus, Saturn, Mars and Jupiter – line up nicely in the sky. This picture contains four of the planets, with Mercury just above the horizon, Venus a nice big bright object above the horizon with a beautiful reflection, Saturn above the Milky Way, and Mars the bright object on the right edge of the photograph.

This scene portrays the state of mind we were in, the pure bliss of being amongst nature and great friends.

It is 8 vertical images scanned from northeast to south around 5:50 a.m. on February 13 during twilight, just before Milky Way started disappearing in the sky. Taken using Canon 5D Mark 3, and Canon 20mm at f2.8 with 30s exposure at ISO 6400.