The island of Tristan da Cunha

This photo, taken by an astronaut aboard the International Space Station, shows the volcanic island Tirstan da Cunha in the southern Atlantic Ocean. 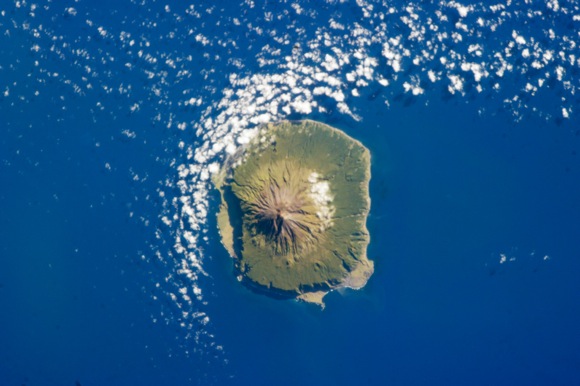 This eight-mile-wide (13 km) island is labeled as a shield volcano – a volcainc structure with a low profile, composed of silica-poor lava. The last known eruption of Tristan da Cunha took place in 1961–1962 and forced the evacuation of the only settlement on the island, Edinburgh of the Seven Seas, on the northern coastline (obscured by clouds in this image). The town is considered to be the most remote permanent settlement on Earth, with its nearest neighbor located 2,173 kilometers (1,347 miles) to the northeast on the island of St. Helena.