The three stars of the Summer Triangle – Deneb, Vega, and Altair – in the March morning sky over Pennsylvania 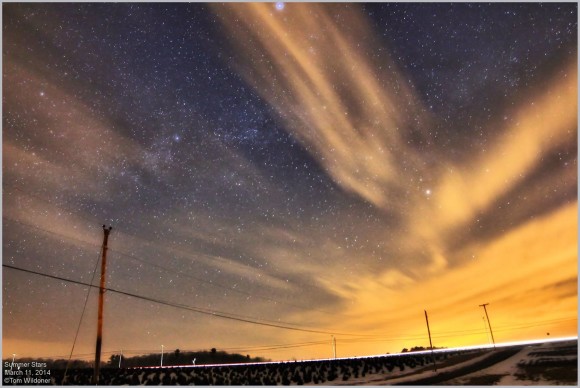 Seen from the northern latitudes, the three brilliant stars of the Summer Triangle – Vega, Deneb and Altair – are actually out for at least part of the night every night of the year. Right now, the Summer Triangle shines in the eastern sky at and before dawn.

On a clear, dark night, the luminescent band of stars that we call the Milky Way passes right through signpost Summer Triangle.

Thank you to Tom Wildoner for sharing his photo with us. Tom wrote:

This image was taken on the morning of March 11, 2014 in Carbon County, PA. This 60 second exposure shows Deneb somewhat left of center, Vega at top center and Altair on the right.

Here’s more about the Summer Triangle.