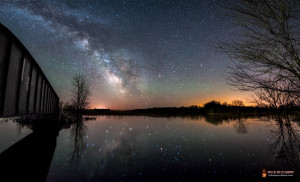 This image is a 4 shot panorama featuring the Spring arc of our Milky Way galaxy reflected in the calm water of Unity Pond, Maine. The structure on the left is a train trestle located on the unused train tracks. This is a tough spot to shoot from because of the rocky & marshy terrain but well worth it. There is quite a bit of green airglow in the sky and the orange hue on the horizon is light pollution. Processed through Lightroom 5 & Photoshop CS5 and stitched via PTGui.

Thank you! Your submission has been received!
Oops! Something went wrong while submitting the form.
END_OF_DOCUMENT_TOKEN_TO_BE_REPLACED