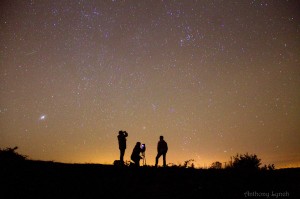 Set the timer on my camera and ran into this shot so we could get a nice pic of the 3 of us with Jupiter, Orion and Taurus and a green meteor flew across the sky but we had to continue to stay still as it was a long exposure shot. As soon as the camera I heard the camera click, I ran down to see if I caught it in the shot. It’s hard to see but it’s there on the left above Jupiter. Taken from Wicklow Ireland. https://www.facebook.com/anthonylphoto

Thank you! Your submission has been received!
Oops! Something went wrong while submitting the form.
END_OF_DOCUMENT_TOKEN_TO_BE_REPLACED

Mars and Regulus in conjunction July 29