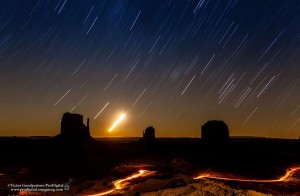 I spent a few hours in Monument Valley the night of Sept 27 to early morning Sept 28. Around 1:10 am, the moon appeared. This is a 25-minute exposure at f5.6 at ISO 100. Shot with a Canon 5D Mark II using a EF24mm f/1.4L II USM lens. Yes, it was cold but it reduced the digital noise that occurs during a long exposure. — at Monument Valley Navajo Tribal Park.

Thank you! Your submission has been received!
Oops! Something went wrong while submitting the form.
END_OF_DOCUMENT_TOKEN_TO_BE_REPLACED