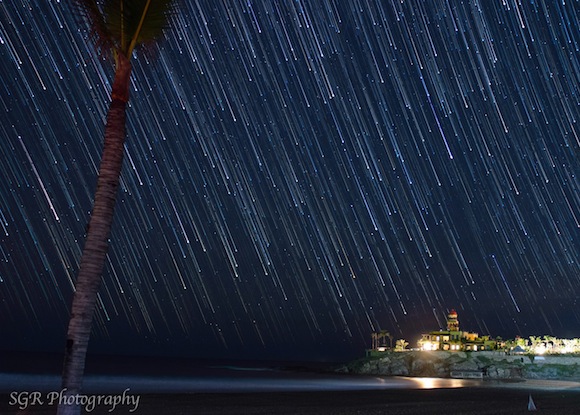 Photographer Sergio Garcia Rill created this stunning composite image of star trails seeming to rain down from the night sky. This image is the product of 80 separate photographs. Thank you for sharing, Sergio!

What is a star trail? It’s a continuous line created by a star – or many lines from many stars, as in this photo – produced during a long time exposure. In other words, the camera doesn’t track along with the stars’ apparent motion (actually caused by Earth’s spin under the sky) as night passes. Instead, the camera stays fixed, while, as the hours pass, the stars move. The resulting photo shows this nightly movement of stars on the sky’s dome.

Are the stars in this photo moving downward? Sergio didn’t tell us what direction he was looking so we don’t know. If he was looking generally westward, the stars were setting, heading toward the western horizon, just as the sun sets each evening and for the same reason (Earth’s spin). If he was facing generally eastward, the stars were rising – moving upward – just beginning their nightly journey across the night sky.

By the way, you can see this photo and other other dark sky photos over at It’s International Dark Sky Week. Share your pics!