While on the hunt for Eta Aquarid meteors, Thomas Wildoner captured 420 frames to create this composite image of star trails. 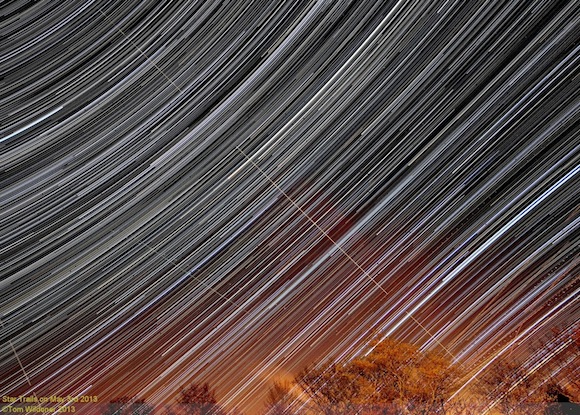 Star trails photographed by Tom Wildoner on May 3, 2013

EarthSky Google+ friend Tom Wildoner captured this image while hunting for Eta Aquarid meteors this weekend. He used a Canon Rebel T4i and Samyang 14mm lens, and he wrote:

The long streak down the center of the photo does look like an airplane. Why? Partly because the streak is so long and regular, but mainly because the interruptions in long streak indicate something blinking. The shorter streak on the bottom left corner of the photo looks like an airplane too. The other streak looks like it could be a meteor! Thank you, Tom, for sharing your photo.

Can you still see the Eta Aquarids? The shower is still going on, but the meteors will be few and far between. For information on meteor showers throughout the rest of 2013, visit EarthSky’s meteor shower guide for 2013.