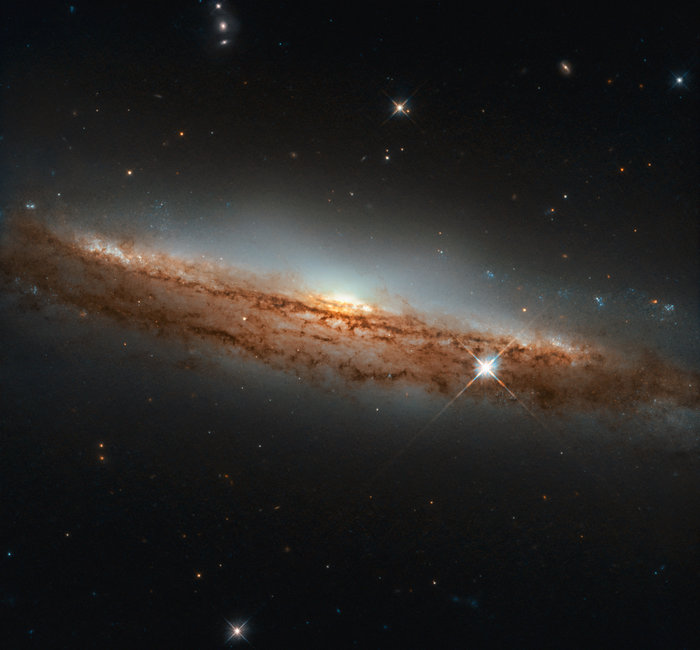 This Hubble Telescope image, released by ESA on October 11, 2019, shows a spiral galaxy oriented sideways. The dust and spiral arms of spiral galaxies, like our own Milky Way, appear flat when viewed edge-on. The galaxy in the image, called NGC 3717, is located about 60 million light-years away in the constellation of Hydra (The Sea Serpent).

In a spiral galaxy, the stars, gas and dust are gathered in spiral arms that spread outward from the galaxy’s center. Because, in this image, we’re looking at NGC 3717 edge-on, we can’t see this galaxy’s spiral arms. But, according to a statement from ESA:

Seeing a spiral almost in profile, as Hubble has here, can provide a vivid sense of its three-dimensional shape. Through most of their expanse, spiral galaxies are shaped like a thin pancake. At their cores, though, they have bright, spherical, star-filled bulges that extend above and below this disc, giving these galaxies a shape somewhat like that of a flying saucer when they are seen edge-on.

NGC 3717 is not captured perfectly edge-on in this image; the nearer part of the galaxy is tilted ever so slightly down, and the far side tilted up. This angle lets you see across the disc and the galaxy’s central bulge (of which only one side is visible).