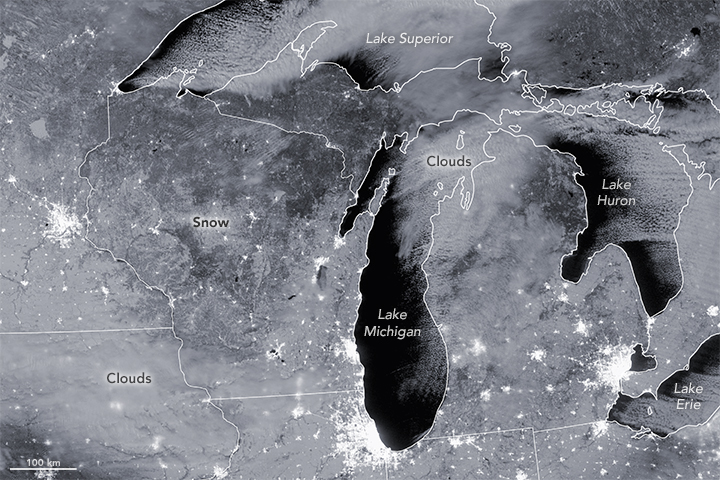 The Visible Infrared Imaging Radiometer Suite (VIIRS) on captured this image on December 14. The instrument can detect faint light sources—in this case, the reflection of the full moon on the fresh snow. Image and caption via NASA Earth Observatory.

A major winter storm hit parts of the U.S. North last week. Also last week, there was a full moon. That how NASA’s Suomi NPP satellite was able to capture this image of moonlight shining on snow, on December 14, 2016, in the area around the Great Lakes. NASA said:

The lake-effect snow [came] on the heels of an earlier accumulation that piled up to several feet of snow in some areas last week, according to reports.

The crisp, bright glow of city lights in Chicago and Detroit offers … evidence that the ground is covered in snow. If the white shade in the image were due to cloud cover, an overcast sky would likely obscure lights on the ground. Note how clouds blur the landscape in the bottom left part of the image.

Cloud streets appear above Lake Huron and Lake Superior. These parallel rows of clouds are created by cold, dry air blowing over a lake and accumulating water vapor.

Read more about this image at NASA Earth Observatory

Bottom line: Image from Suomi NPP satellite of snow from last week’s winter storm, illuminated by moonlight, in the region of the Great Lakes.

What is lake-effect snow?