Smoke trail from fireball over Arizona

NASA said the June 2 meteor was the largest seen by its camera network in 8 years. It identified this smoke trail as what the meteor left behind. Video of the fireball here. 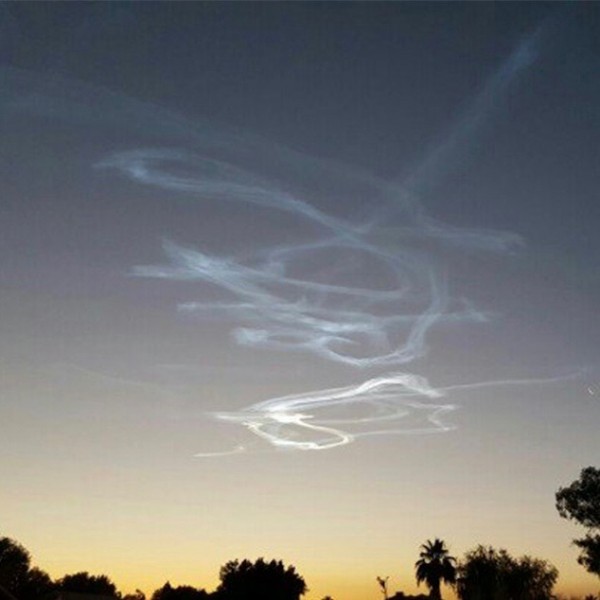 The American Meteor Society (AMS) says it’s received over 340 reports so far of a bright fireball over Arizona, early in the morning of June 2, 2016. The bright meteor – a small asteroid, apparently – sizzled through Earth’s atmosphere at around 3:57 a.m. MST (10:57 UTC). Most people reporting the event were in Arizona, but AMS says that witnesses viewed it from Utah, New Mexico, California, Texas and Nevada as well.

NASA said that the June 2, 2016 meteor over Arizona was a small asteroid:

Based on the latest data, a small asteroid estimated at 5 feet (1-2 meters) in diameter – with a mass of a few tons and a kinetic energy of approximately half a kiloton – entered Earth’s atmosphere above Arizona just before 4 a.m. local (MST) time. NASA estimates that the asteroid was moving at about 40,200 miles per hour (64,700 km per hour).

The video below is a compilation of sightings of the June 2 fireball (profanity alert at around 00:25 seconds).

Eliot Herman in Tucson runs an automatic meteor camera. The sequence of photos below shows before, during and after the meteor:

Eliot Herman in Tucson wrote: “A large meteor exploded over Arizona with an estimated yield of about 10 kilotons, small nuclear-weapon-sized. The photo shown shows an Oculus meteor camera image of the minute before and after bracketing the explosion. Each image is 1 minute in length. The meteor passed to the north of Tucson. NASA reported this was the largest meteor seen by their meteor camera network in 8 years.”

Despite the early hour, many apparently saw the meteor, and many more saw the smoke trail it apparently left behind.

In the northeastern sky, here's the trail from what seemed to be a meteor. pic.twitter.com/tQIaOpBGLI

Fireballs – bright meteors – are common, if you consider Earth as a whole. We hear reports of them every few days, from somewhere. But seeing one over your location is special!