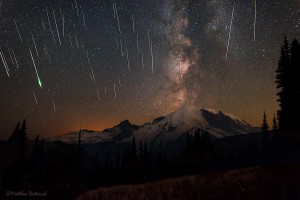 Matt Dieterich
E-mail mdieterich58@gmail.com
Website https://www.mdieterichphoto.com/
Location Mount Rainier National Park
Date and Time Taken August 12th, 2015
Story behind the image Talk about a night to remember! The morning of Thursday August 13th, 2015 the Perseid Meteor shower peaked. I was working at Mt. Rainier National Park and created this image from a 2 hour long time-lapse video to record as many Perseid Meteors as possible. The alignment of our Milky Way was situated perfectly vertical over Mount Rainier, an active volcano. Between 2 and 5am we counted over 200 meteors! Unfortunately the camera recorded only about 40 of them.
Equipment Details Nikon D750 and Rokinon 24mm F/1.4
Post-processing Details Each image with a meteor was manually aligned on one main star field to place meteors in their respective location in the night sky.

Thank you! Your submission has been received!
Oops! Something went wrong while submitting the form.
END_OF_DOCUMENT_TOKEN_TO_BE_REPLACED