If you could see the shock wave from a jet moving faster than sound, this is what it would look like. 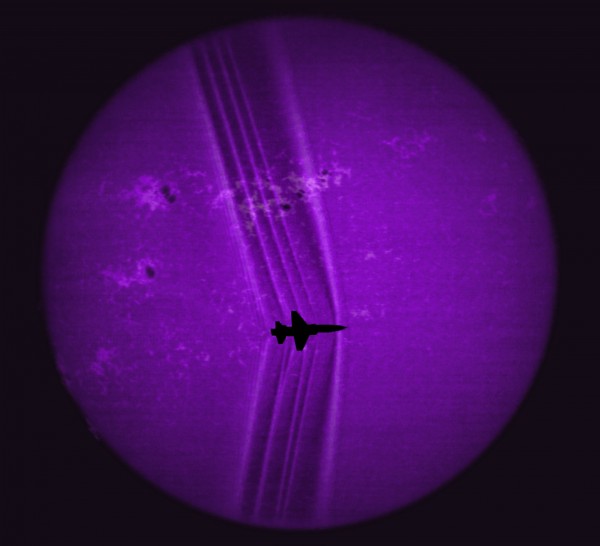 Shock waves streaming from a jet flying at supersonic speeds. The jet is passing in front of the sun, which gets its purple color from a calcium-K optical filter. Dark sunspots are also visible. Image via NASA Earth Observatory.

The image above shows a supersonic jet passing in front of the sun, with the jet’s shockwave visible. A team of NASA researchers generated the images and other like it (here and here), using a modern version of a 150-year-old German photography technique called Schlieren imaging. A NASA webpage explained that, in the images on this page, shock waves appear darker because changes in the air density affect how much light is refracted. NASA wrote:

Shock waves are narrow regions of air where pressure, temperature, and density characteristics are drastically different than surrounding areas. Shock waves occur when objects move faster than the speed of sound, which is 1,236 kilometers (768 miles) per hour.

While either the land surface or the sun can serve as the background, using a celestial body is simpler and cheaper because the camera can be located on the ground rather than on a second airplane.

Read more about this image from NASA Earth Observatory. 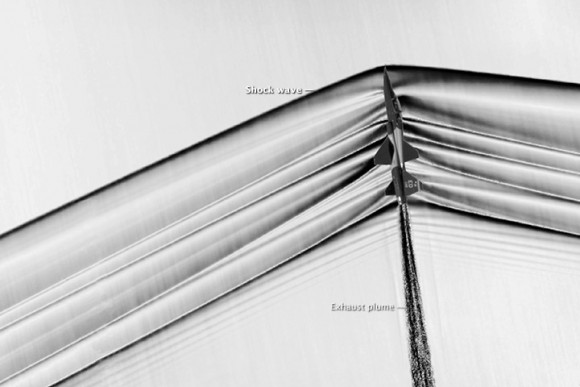 Shock waves produced by a supersonic jet flying over the Mojave Desert. The image was captured by a high-speed camera on the underside of a smaller aircraft flying several thousand feet above the jet. Image via NASA Earth Observatory.