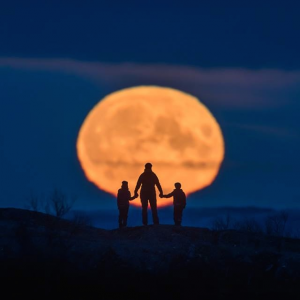 This is my wife and my two kids watching tonight’s full moon rise above the horizon. I planned the shot during the day while the sky was clear and everything look great for the evening. Just an hour before the Moon was about to rise, the clouds started to move in from west and the sky was quickly covered.

I was a bit worried that we wouldn’t be able to do the shot but as you can see the sky was clear to the east just enough for the full moon to be visible.

Thank you! Your submission has been received!
Oops! Something went wrong while submitting the form.
END_OF_DOCUMENT_TOKEN_TO_BE_REPLACED