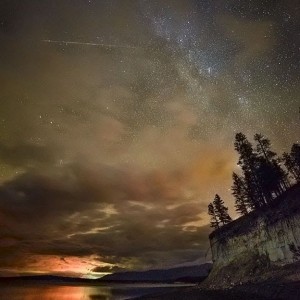 The Andromeda galaxy (top right) watches from above the roiling clouds that partially veiled northern lights (bottom left) and meteors streaking across our own Milky Way galaxy. This meteor traces back towards a region between the Pleiades and Aldebaran (in Taurus), so I suspect it was a northern Taurid meteor. Seen from the shore of Lake Koocanusa in northwestern Montana.

Thank you! Your submission has been received!
Oops! Something went wrong while submitting the form.
END_OF_DOCUMENT_TOKEN_TO_BE_REPLACED