Here’s a sea fog, called a haar in Scotland. They occur on the east coast of England or Scotland in spring and summer, when warm air passes over the North Sea. 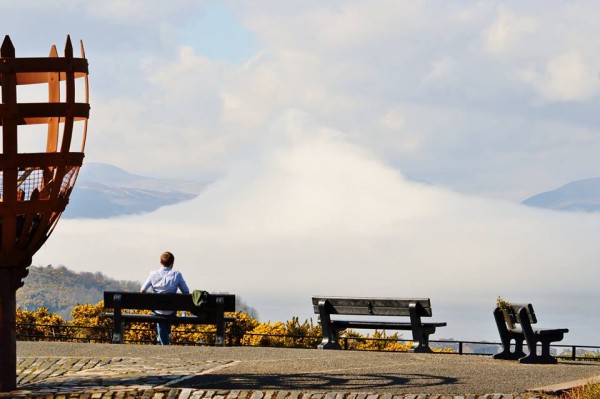 View larger. | Photo by Will Keogh.

Sea haar and clouds meet in perfect harmony. Pic taken from Lyle Hill, Greenock towards Gourock in Scotland. The haar occurs when warm air condenses over the cold river creating a fog.

The ‘haar’ is also known as a ‘sea fret.’ It typically lies at a uniform height above the waterline but it is a moving entity, i.e. by the wind.

However, when the haar collides with, for example, a hillside, the haar is displaced from the horizontal.

Thank you, Will Keogh!

BBC meteorologist Gail Pirie agrees that a fret, haar and sea fog are all the same thing. She says these fogs typically occur between April and September, when warm air passes over the North Sea:

The variation in name simply arises from the locale in which you happen to find yourself when the fog rolls in off the sea. On the east coast of Scotland sea fog is known locally as haar or North Sea Haar, and it is often said to plague local residents during the summer. Likewise, it’s English counterpart – Fret or Sea Fret can make summer days on the East coast of England miserable.

Bottom line: These sorts of sea fogs are called haars on the east coast of Scotland and frets on the east coast of England. They’re usually flat, but this photo by Will Keogh shows a haar that’s been pushed horizontally after colliding with a hillside, so that it rises up toward clouds above.