Dramatic photo showing a towering cloud of black smoke from the rubber fire in Savannah, as migrating birds move over the U.S. South. 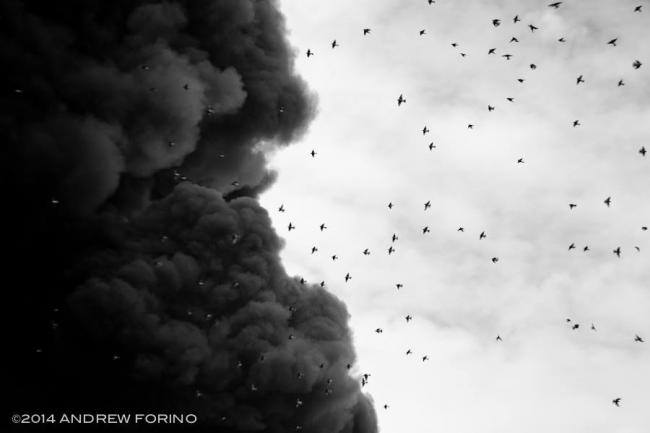 Photo by Savannah College of Art and Design student Andrew Forino on Saturday, February 7, 2014, the day the day a giant blaze fueled by 5,600 tons of rubber burned at the Port of Savannah. Visit Andrew Forino’s Facebook page.

Our friend Curtis Beaird posted this photo to EarthSky’s Facebook page. He said the leading edge of bird migration has begun over the U.S. South and that American Robin and Red-winged Black bird are already making their way north, crossing over Georgia. Looking at this photo, many wonder if and how the explosion and fire on Saturday (February 8, 2014) that burned over 5,000 tons of raw rubber in Savannah, Georgia affected migrating birds. Andrew Forino of Savannah captured this photo on Saturday.

Curtis said the plume of smoke looked like a weather front as it moved with the winds. It could be seen for miles.

By late Saturday, the fire department said its crews had contained the fire, but it could take a while for the flames to burn out inside a warehouse covering 226,000 square feet at the port’s Ocean Terminal just west of downtown Savannah.

We join Curtis, Andrew and others in wondering how Savannah’s rubber fire affected the birds.