This isn’t the day and night side of Iapetus. It’s the day side, a nearly full-on view. The two sides of this moon of Saturn have very different brightnesses. 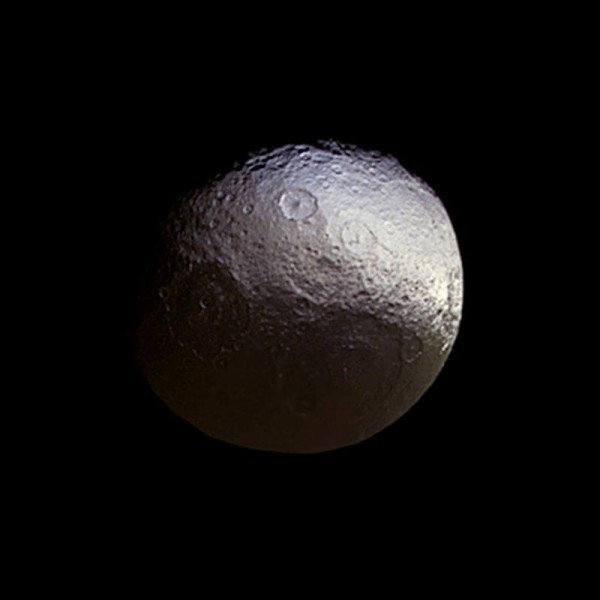 View larger. | Saturn’s moon Iapetus, imaged by the Cassini spacecraft on March 27, 2015. You are looking here at nearly the entire “day” side of the moon. The difference in brightness across the moon’s face – one side bright and one side dark – is real. Image via NASA / JPL / ESA Cassini spacecraft.

Here is a distant but fairly detailed color view of Saturn’s third-largest, third-most-massive and most distant of the major moons, Iapetus. The moon is 1,471 kilometers / 914 miles wide. This view has been enlarged and sharpened. You’re seeing the moon’s day side here; see the terminator line, or line between light and dark on Iapetus, from about the 9 o’clock to 1 o’clock positions? The Saturn-orbiting Cassini spacecraft captured this view of the moon Iapetus through its Narrow Angle Camera, from a distance of 1 million kilometers / 621,000 miles. This view is looking down onto the far northern latitudes with the north pole of Iapetus visible roughly midway along the demarcation of this large Saturn moon’s bright trailing side and darker leading side.

Iapetus is two-toned. Its surface is much darker on the moon’s leading side, that is, the side that faces forward as Iapetus moves in orbit around Saturn. It is much brighter on its trailing hemisphere.

Iapetus orbits Saturn at a mean distance of 3.57 million kilometers / 2.22 million miles once every 79.32 days.

Iapetus is kronesynchronous, in other words keeps the same face turned towards Saturn permanently, just as our own moon, which is geosynchronous, does toward Earth. Thus we know that, as on Earth’s moon, the orbital and rotational periods of Iapetus are the same.

The darkness on Iapetus’ leading side is thought to stem from a carbon-rich coating being formed as particles, mostly from Saturn’s moon Phoebe (a suspected captured former Kuiper Belt Object), are being swept up.

The trailing side of Iapetus is, of course, being sheltered from this dust by the body of the moon itself.

There is also quite a difference in mean surface temperatures between the leading and trailing sides of Iapetus. The darker leading side (called Cassini Regio by planetary scientists) is warmer. It can warm up to minus 144 Celsius / minus 227 Fahrenheit. Meanwile, the brighter trailing side (Roncevaux Terra) does not get above minus 160 Celsius / minus 256 Fahrenheit.

At the winter poles of Iapetus, temperatures drop to minus 183 Celsius / minus 297 Fahrenheit.

Iapetus is almost certainly mostly ice, with a mean global density of 1.09 grams per cubic centimeter, only just above that of pure ice. There is a little rock, but less than 2% by mass.

One mystery is that the orbit of Iapetus is inclined by 15.43 degrees to Saturn’s equator and to the plane of the other major moons of Saturn. The reason for this disparity between Iapetus and the other large moons of Saturn is unknown. I myself suspect that Iapetus was almost snatched from Saturn during the time when the four giant planets Jupiter, Saturn, Uranus and Neptune, jostled for position shortly after their formation. It would also explain, in my opinion, the large distance from Saturn for such a large moon.

Visible quite clearly in the photo above are the Turgis and Roland impact basins and the large Tibald and Turpin craters. Naimon Crater is visible on the limb at the three o’clock position.

Iapetus is also home to some of the tallest mountains in the solar system outside of the planet Mars, asteroid 4 Vesta and Jupiter’s volcanic moon Io. 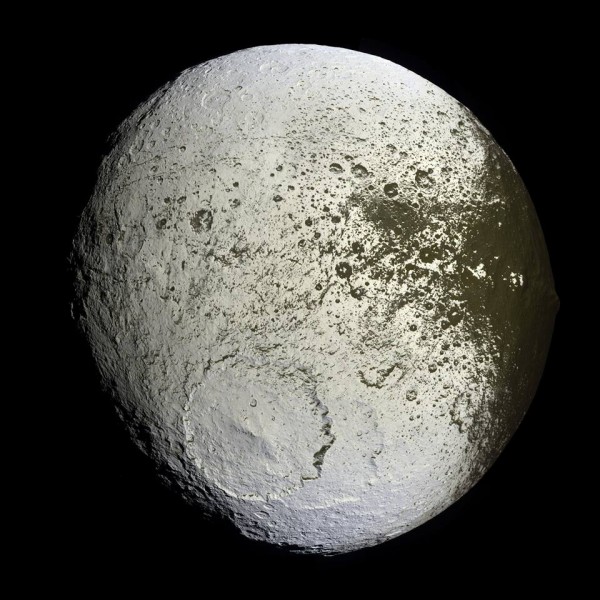 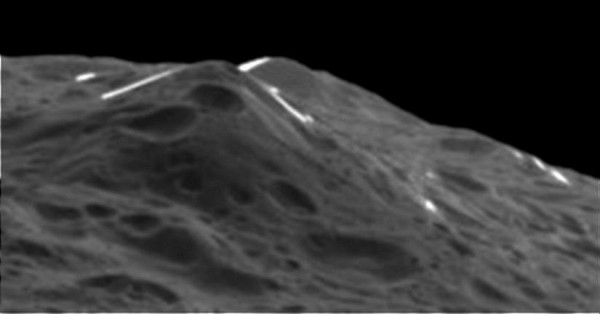 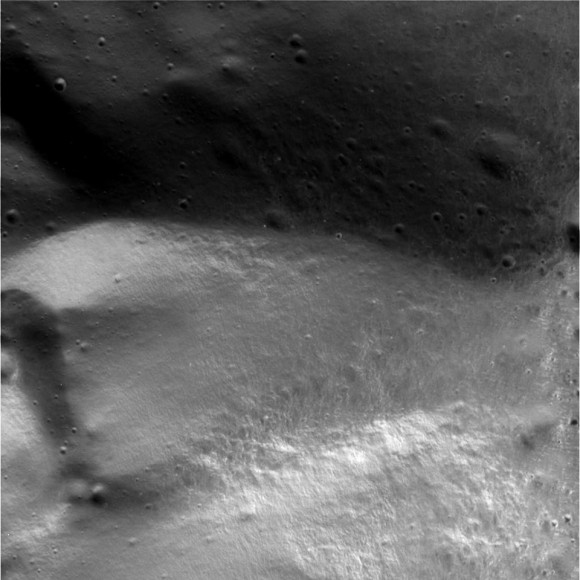 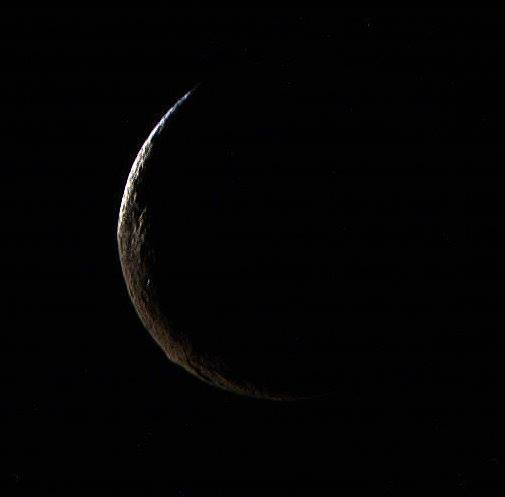 Bottom line: A distant but fairly detailed color view of Saturn’s third-largest, third-most-massive and most distant of the major moons, Iapetus.