This is the fully illuminated far side – sometimes mistakenly called the dark side – of the moon. A satellite caught this view last month.

This animation features actual satellite images of the far side of the moon, illuminated by the sun, as it crosses between the DSCOVR spacecraft’s Earth Polychromatic Imaging Camera (EPIC) and telescope, and the Earth – a million miles away. Image via NASA/NOAA

Here’s something you don’t see every day. It’s our moon, as seen from its far side, crossing the face of the Earth. A NASA camera aboard the Deep Space Climate Observatory (DSCOVR) satellite was conducting a series of test images when it captured this view of the moon in July, 2015.

From its position between the sun and Earth, DSCOVR conducts its primary mission of real-time solar wind monitoring for the National Oceanic and Atmospheric Administration (NOAA). 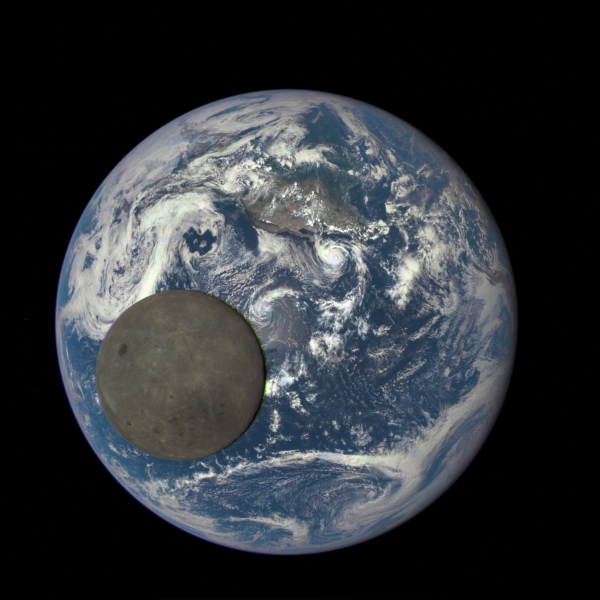 Still image of July, 2015 capture by DSCOVR satellite of moon and Earth. Image via NASA/NOAA

Bottom line: In July 2015 – while testing a spaceborne camera – a satellite caught images of the moon crossing the Earth’s face. The images show the moon’s far side, the side never seen from Earth.