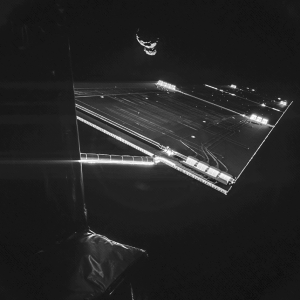 Here is a Rosetta ‘Selfie’ with comet 67P/Churyumov–Gerasimenko in background taken bby the CIVA camera onboard the Philae Lander.

Comet 67P/Churyumov–Gerasimenko was 50 KM / 31 miles away at the time. Two frames were taken and merged due to the high contrast.

Thank you! Your submission has been received!
Oops! Something went wrong while submitting the form.
END_OF_DOCUMENT_TOKEN_TO_BE_REPLACED