Rock pile towers against a backdrop of the night sky in Rye, New Hampshire. 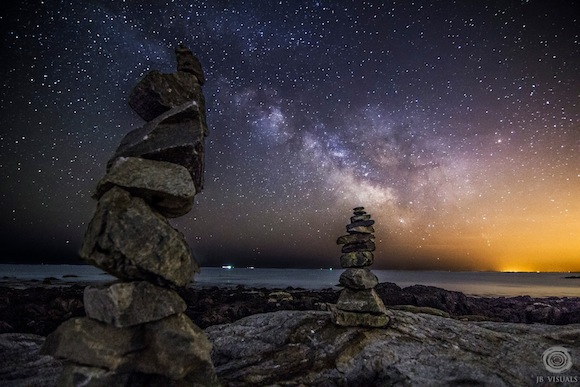 Jared Blash took this photo on the rocky shores of the Atlantic Ocean near Rye, New Hampshire. He had this to say about the shot:

I decided to go out shooting at a spot I visit often in Rye, NH last night since the forecast was looking bleak for the upcoming weekend. It was a beautiful night and stayed clear up until around 2 a.m. I ended up getting few shots I’m really happy with.

It’s fascinating to me how humans will pile up rocks. We swim at a nearby creek where, every summer, people make rock piles that grow larger all summer, coming up out of the water. With the spring rains each year, they wash away … and then people begin in early summer to re-build them again. There’s something in us humans that needs to pile up rocks!

Thank you, Jared, for the beautiful photo.