Singapore is big on laser light shows. Has them every night! Justin Ng offers the “impossible:” Milky Way rising behind the laser lights and city lights. 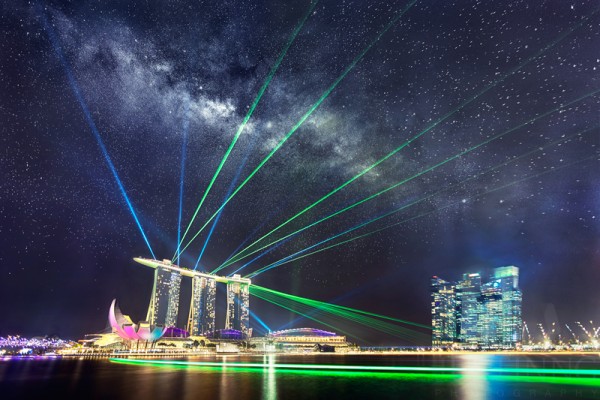 The Milky Way, and a laser light show, over Singapore. Photo by Justin Ng. For more about this photo, visit Justin Ng’s blog.

Justin Ng captured this beautiful scene last night (July 21, 2014) It’s another of his “impossible” shots – that is, photos that inspire more astrophotographers in light-polluted cities to unveil the beauty of the elusive Milky Way galaxy. Justin wrote:

The image is a result of stacking several exposures taken, without moving the camera or changing the lens, over a period of approximately 35 minutes. It shows you how the night sky looked like at 9.10PM SGT before the spectacular laser show started from 9.30PM SGT onwards. We can’t see the night sky with our naked eye here due to its extreme light pollution and so, I’ve used a very complex workflow to unveil the details of the night sky before I stacked it against the beautiful foreground, showing the exact position of the Milky Way galaxy from this angle at 9.10PM SGT. I’ve also stacked a one-minute exposure shot for the green light trails from the riverboat. Minor star trails are visible in the image due to the correction of distortion and correcting the distortion with the lasers is no easy task. If I had corrected the distortion of the foreground image before I stacked the night sky image, the position of the Milky Way will not be accurate.