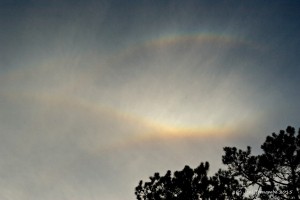 I’ve been photographing atmospheric optics, arcs/halos for several years but this rare display was a first for me. My local meteorologist and I agree it could be a Lowitz Arc.

Thank you! Your submission has been received!
Oops! Something went wrong while submitting the form.
END_OF_DOCUMENT_TOKEN_TO_BE_REPLACED