The Lowitz arc is associated with the common 22-degree halo often seen around the sun or moon. It’s rare, faint and fleeting. 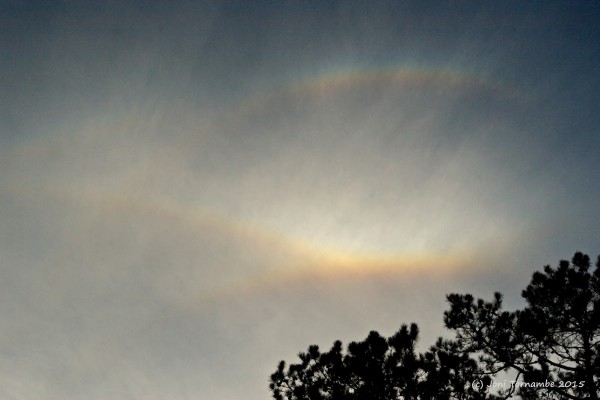 Joni Tornambe in Blue Ridge, Georgia submitted this image of a rare and beautiful sky phenomenon, associated with ice crystals in the upper air and the classic 22-degree halos they produce. Joni said her local meteorologist called this a Lowitz arc … and so it is. We confirmed that with the sky optics expert Les Cowley of the website Atmospheric Optics. Les said that there are three types of Lowitz arcs, and that Joni captured what’s often the most clearly seen of the three, called an upper Lowitz arc. He said:

That image, if taken before the early 1990s, would have given Joni world fame!

He explained why at the Lowitz arc page on his website:

Lowitz arcs were the most controversial of the halos. They were first recorded in 1790, but even until the 1990s their existence was doubted. Now … digital cameras, easy Internet communication and much increased interest in atmospheric optics combine to produce images each year.

Nonetheless, Lowitz arcs remain rare. When they are seen they are usually fleeting, faint and indistinct.

Joni agreed that what she captured was something she’d never seen before. She told EarthSky:

I’ve been photographing atmospheric optics, arcs and halos, for several years, but this rare display was a first for me.