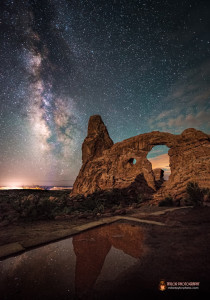 Name Mike Taylor
E-mail info@miketaylorphoto.com
Website https://miketaylorphoto.com
Location Arches National Park, Utah
Date and Time Taken
Story behind the image A rare puddle from an afternoon shower makes for nice reflections along the walkway to Turret Arch in Arches National Park, Moab Utah. The moon came up as a sliver behind me and offered just the right amount of illumination on the arch and the foreground at 4 AM. The light pollution on the horizon below the Milky Way is coming from the town of Moab. This image is a as single exposure that was processed through Lightroom 5 twice – once for the foreground and once for the sky – and blended through Photoshop CS5.

Thank you! Your submission has been received!
Oops! Something went wrong while submitting the form.
END_OF_DOCUMENT_TOKEN_TO_BE_REPLACED