Artist’s impression of 50,000 Quaoar, a small rocky world with its own moon, a billion kilometers beyond Pluto. 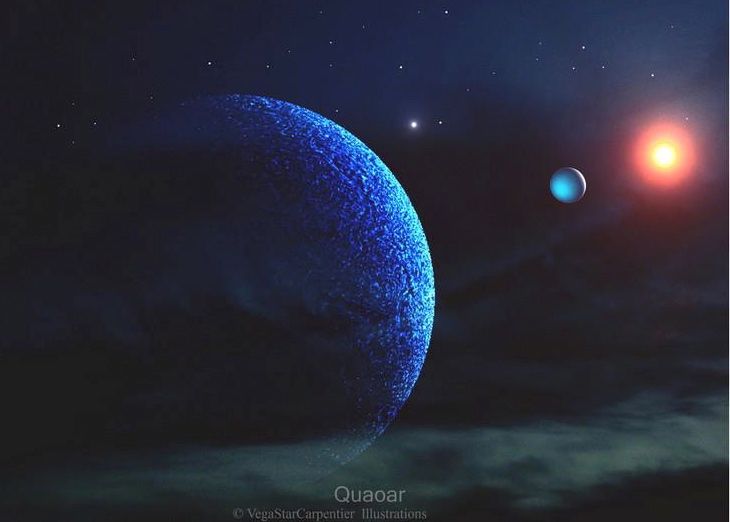 Artist’s impression of 50000 Quaoar, Neptune and our sun by VegaStar Carpentier in Paris. View larger. Thank you, VegaStar! Visit VegaStar on Flickr

This is an artistic view in the foreground Quaoar, Neptune, and our sun .. 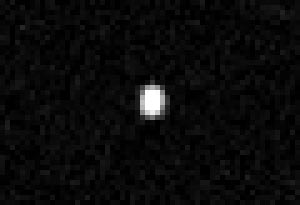 Here’s how Quaoar actually looks to us from our earthly vantage point, through a large telescope. This image is a sum of 16 separate exposures made using the Hubble Space Telescope in 2002.

What is Quaoar? Michael Brown and Chadwick Trujillo of the California Institute of Technology in Pasadena discovered this object in 2002. It is extremely faint as seen from Earth, but they used the large Palomar 48-inch telescope to notice it creeping in front of the star background. Its motion in front of the stars showed that it is closer to us than the stars, a member of our own solar system. From the first, Quaoar appeared relatively bright for such a distant object, but it was too small for even large telescopes to see in any detail.

Astronomers were able to determine, however, that the object lies a billion kilometers beyond Pluto and moves around our sun every 288 years in a near-perfect circle. NASA’s Hubble Space Telescope was able to measure Quaoar and found it to be about 800 miles (1,300 kilometers) wide. That’s about about half Pluto’s diameter, but more than 400 kilometers wider than the biggest main-belt asteroid (Ceres). The IAU later officially named the object Quaoar (pronounced “Kwawar”). It’s a native American name – from the Tongva people of the area around Los Angeles, where the discovery of Quaoar was made. The name represents an ancient creator god of the Tongva people.

Later, astronomer Michael Brown reported a moon for Quaoar. The moon is estimated to have only one two-thousandth the mass of its parent world. The IAU named the moon for the sky god Weywot, son of Quaoar.

Bottom line: Quaoar is a world a billion kilometers farther from our sun than Pluto. It has about half Pluto’s diameter, and its own moon. But it hasn’t yet been officially designated as a dwarf planet.

Read more from the IAU about planet and dwarf planet definitions