The goal of ExoMars 2018 is to search for evidence of past or present martian life. 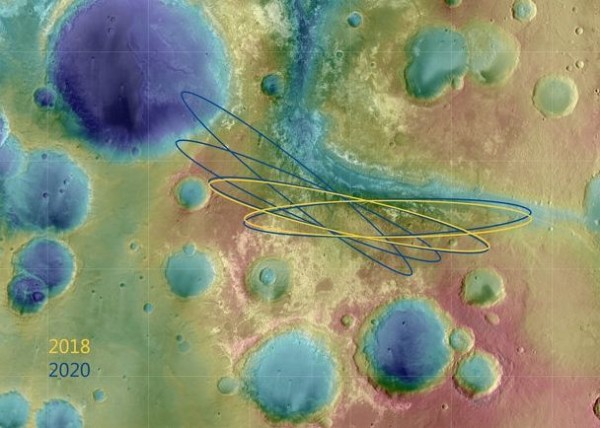 Mawrth Vallis, one of four candidate landing sites under consideration for the ExoMars 2018 mission. The landing ellipses under evaluation for this site selection are indicated, and cover an area of 170 x 19 kilometers (105 X 12 miles). The orientation of the landing ellipse depends on when the launch takes place within a given launch window. All candidates landing sites for this mission have to be compliant with launch opportunities in both 2018 and 2020, as indicated. Image via ESA/DLR/FU Berlin & NASA MGS MOLA Science Team

Say hello to Mawrth Vallis on Mars. Mawrth means Mars in Welsh, and Vallis just means valley. This region on Mars is an ancient channel, thought by most Mars scientists to have been carved by outburst floods in Mars’ past. It’s one of four candidate landing sites under consideration for the ExoMars 2018 mission.

Mawrth Vallis is one of the oldest outflow channels on Mars, at least 3.8 billion years old. It hosts large exposures of finely layered clay-rich rocks, a strong indication that water did once play a role here. 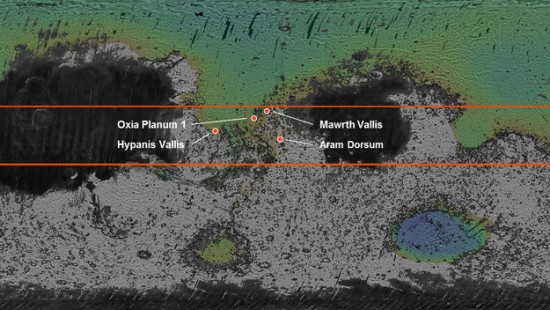 Bottom line: Mawrth Vallis is an ancient outflow channel on Mars and one of four candidate landing sites under consideration for the ExoMars 2018 mission.