It’s nearly the best time in two years to see Mars. On April 8, Earth in its smaller, faster orbit will pass between Mars and the sun.

Here are a couple of wonderful shots of the same thing – something you can see for yourself in the night sky – the red planet Mars and bright, blue-white star Spica near each other on the sky’s dome. Both are rising not long after sunset now and are in the sky all night. In the shot above, Daniel McVey caught them ascending over the mountains in the Colorado Rockies. Notice he has outlined the little squarish constellation Corvus the Crow (or Raven) near them. It can help you be sure you’ve found Mars and Spica. Notice that a line between the Corvus stars Glenah and Algorab points to Mars and Spica.

It’s now the best time in two years to see Mars. Chart and more photos here: How to see Mars in 2014.

Meanwhile, Asthadi Setyawan in Batu City, East Java, Indonesia captured this cool photo of the planet Mars on March 28, 2014. Mars is the brighter reddish object. The light is pointing straight toward it. 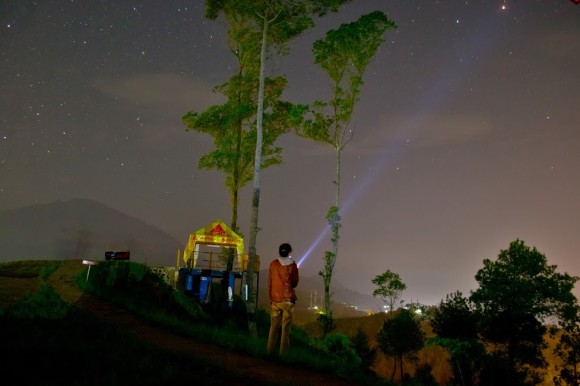 Photo of two bright objects near each other in Earth’s night sky now. The fainter bluish one is the star Spica in the constellation Virgo. The brighter, reddish one is Mars. Photo by Asthadi Setyawan. Follow Asthadi Setyawan on G+.

Bottom line: Two great photos of planet Mars and star Spica in the March 2014 night sky. It’s nearly the best time in two years to see Mars! Watch for it.