Wow! So many of you are catching the moon, Venus and Mercury after sunset. Thank you for all your photos. We wish we could post them all! 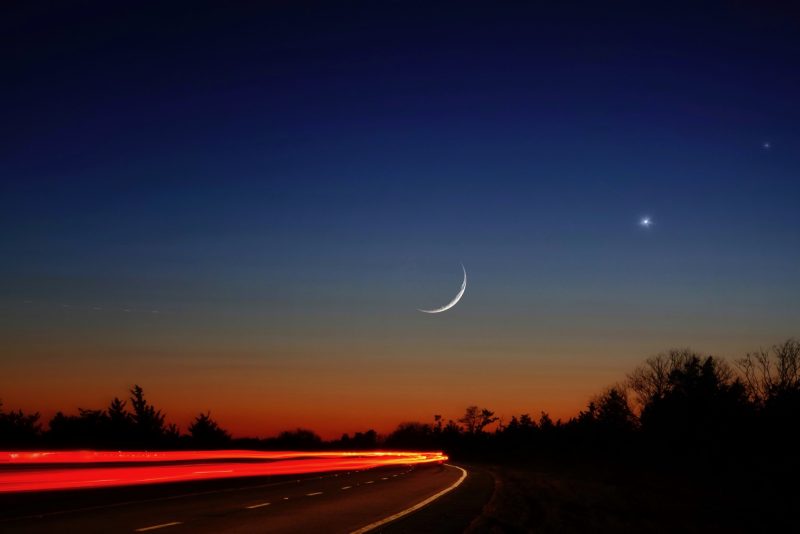 David Pace in Long Island, New York created this composite after seeing the moon, Venus and Mercury on March 18. He wrote: “I was with my 11-year-old boy, freezing, but warmed by each other’s company and the beautiful sky … I was going for light trails so had to leave the shutter open for an extended period. I tried 30 seconds, then 25 and down to 15. I had blurring of the moon and planets, due to the Earth’s movement. So I had to take two shots, then laid one over the other to complete the photo.”

The young moon has returned to the evening sky and is sweeping past two planets in the west after sunset. The planets are the sky’s brightest, Venus, and the most elusive, Mercury. Watch for them in the west on Monday and Tuesday evenings, too! Thanks to all in the EarthSky community who contributed photos. We got over 100 of these beauties and wish we had the means to post them all. 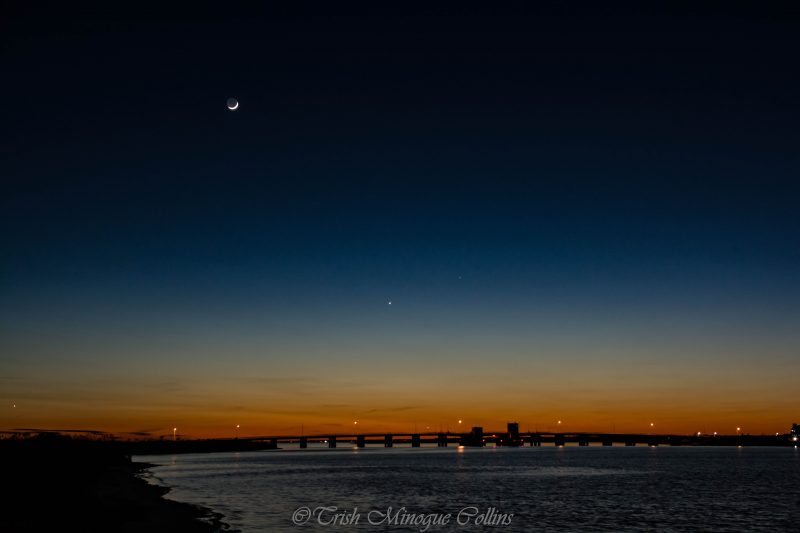 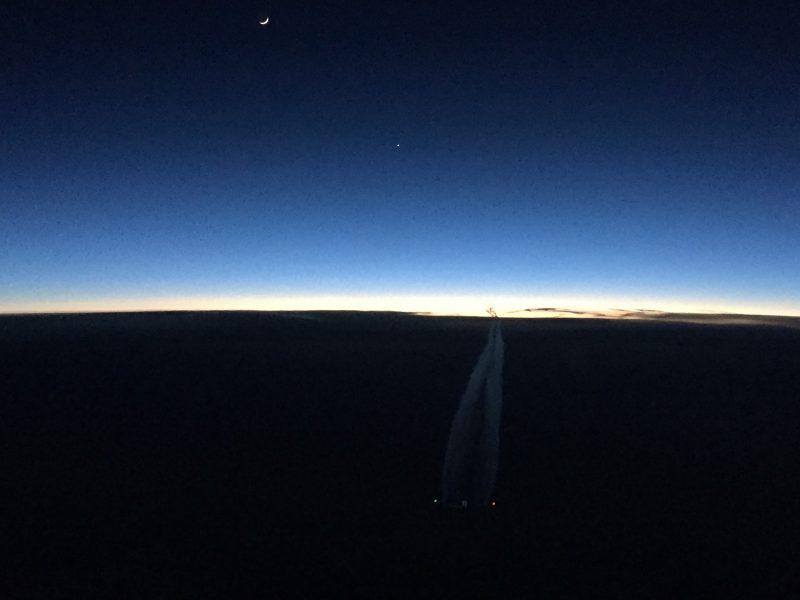 Rob Koplitz shot this shortly after sunset on March 19, 2018 from the flight deck of a Boeing 747 westbound over the Caspian Sea, with another aircraft approaching eastbound below. 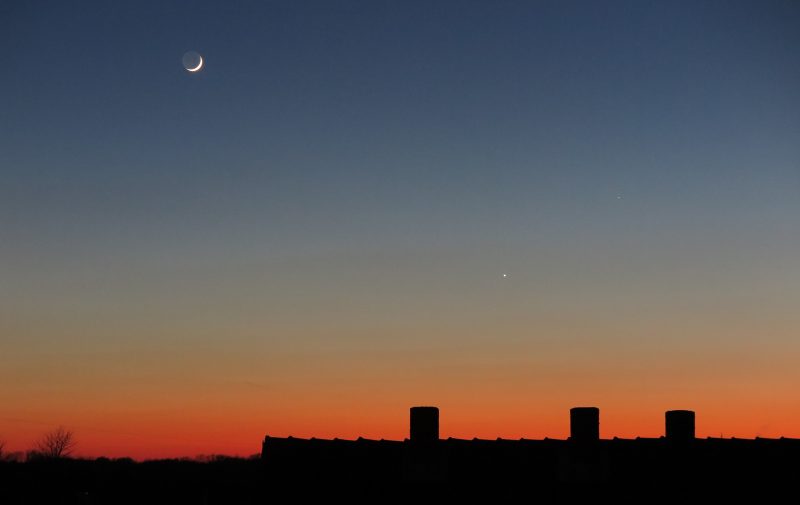 Andreas Bernard in Seelze, Germany, wrote on March 19, 2018: “I never thought that I can take a photo of Mercury in my lifetime, but here it, and I like it. Btw: I like your newsletter and your EarthSky website.” Thank you, Andreas! 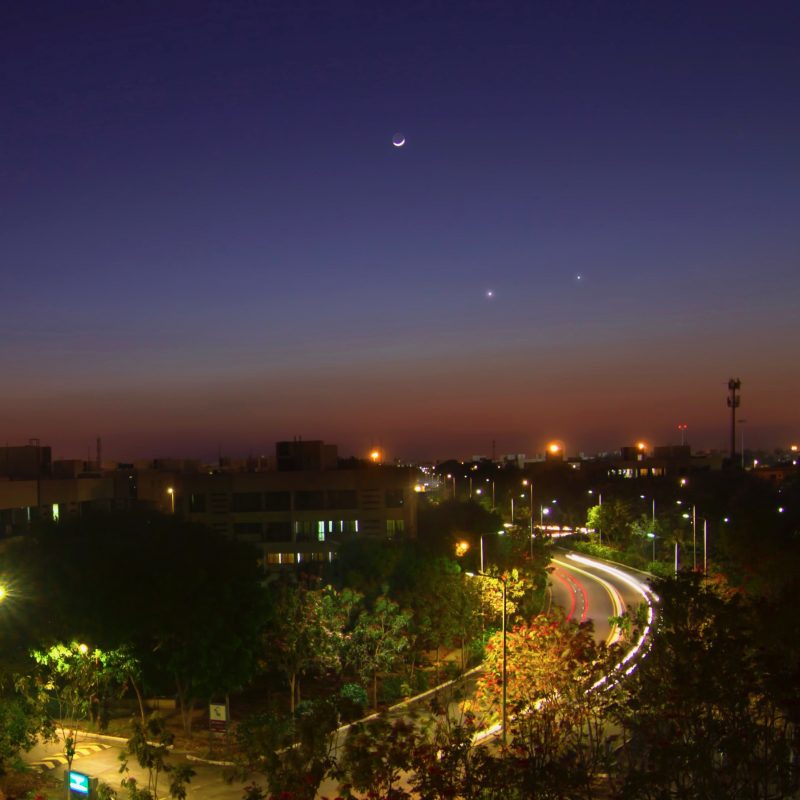 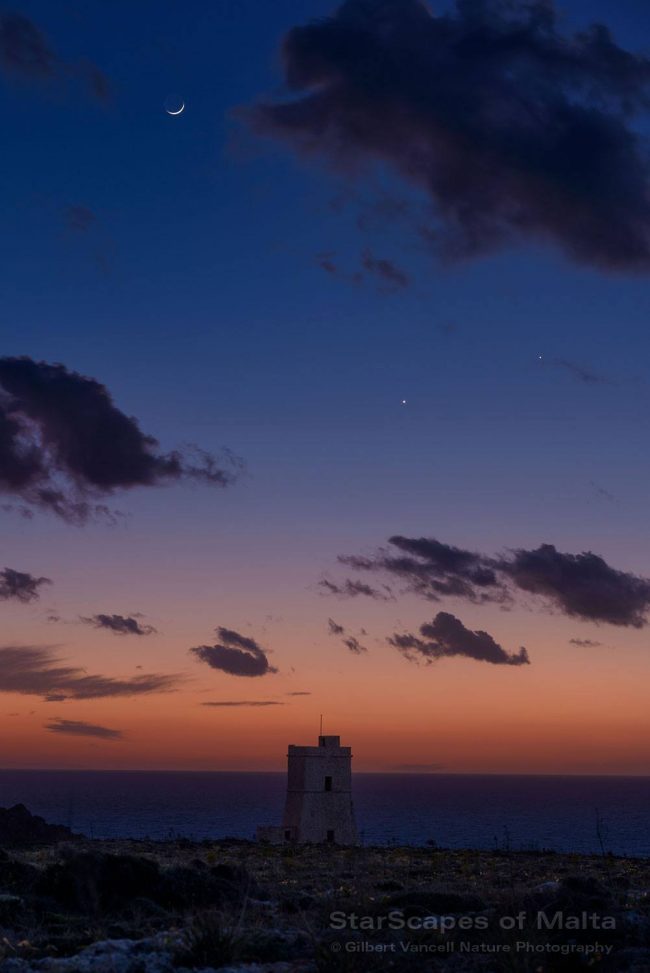 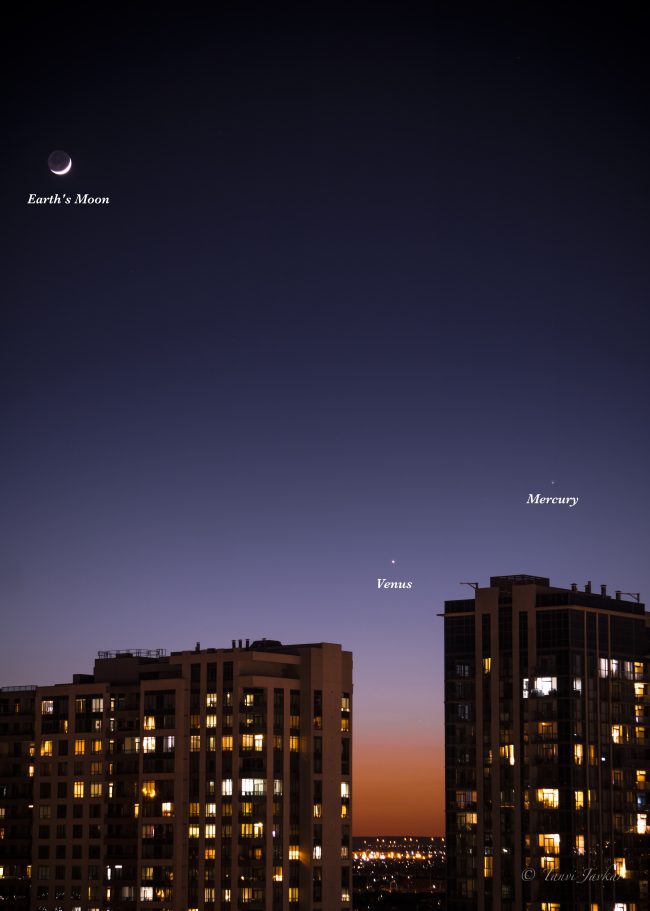 Moon and planets on March 19 from Tanvi Javkar in Hamilton, Ohio. Sony A6000. Notice the varying orientation of the moon with respect to the planets in different photos on this page, for example, this photo by Tanvi Javkar versus the one below by Scarlet Bucket. This difference – in the moon’s location from March 18 to March 19 – was primarily due to the moon’s motion in orbit around Earth. 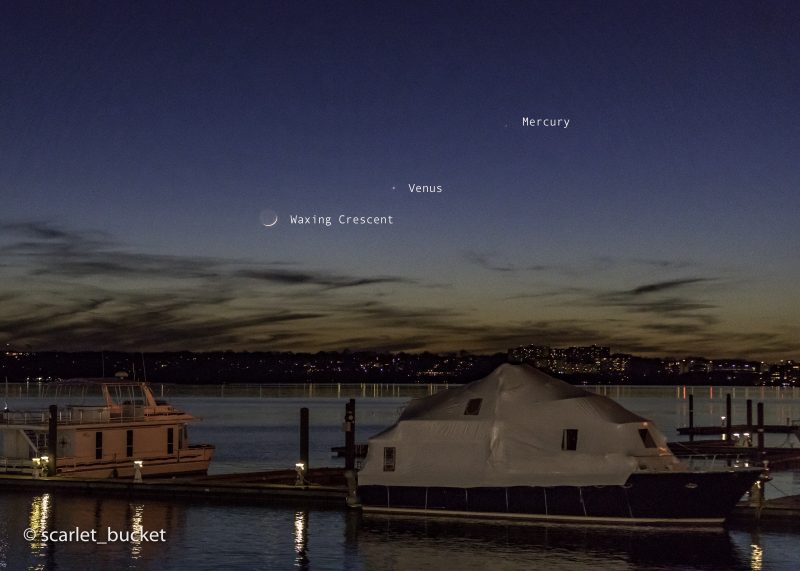 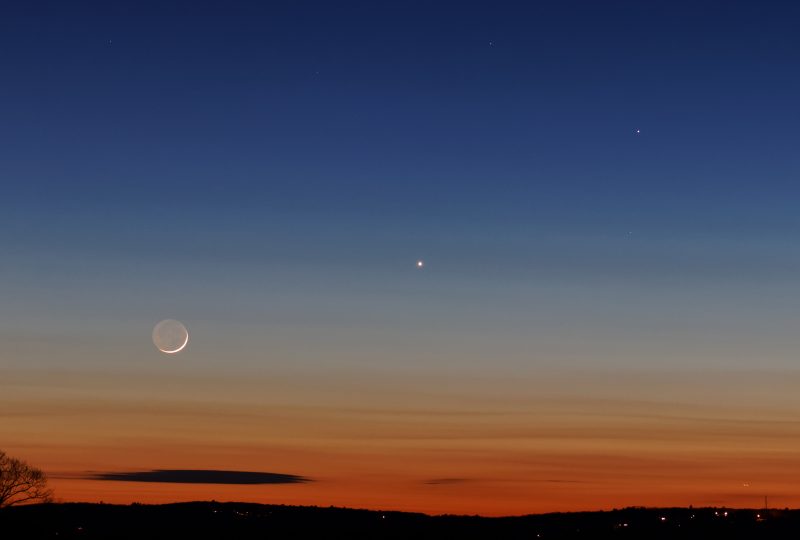 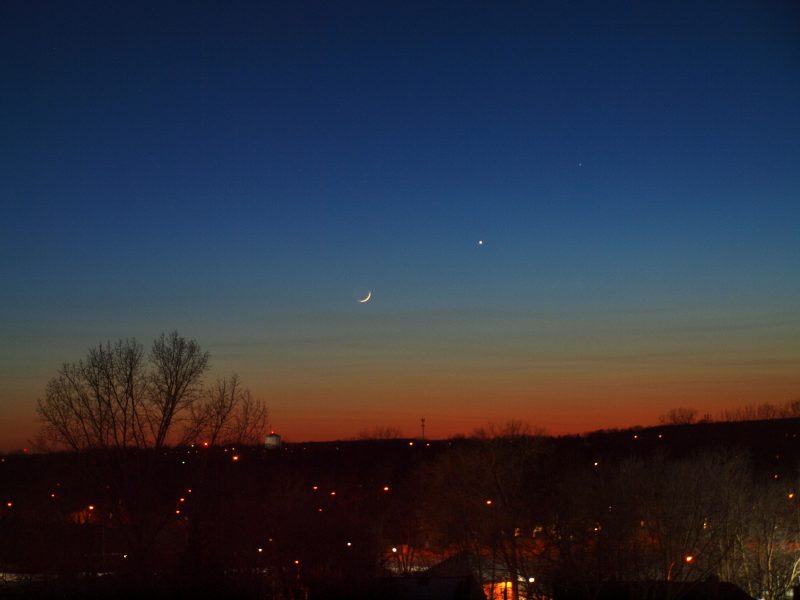 Nicholas Papaconstantinou caught the trio on March 18 and wrote: “Selena, Aphrodite, and Hermes (moon, Venus, and Mercury) all in a row in Montreal’s dusk.” 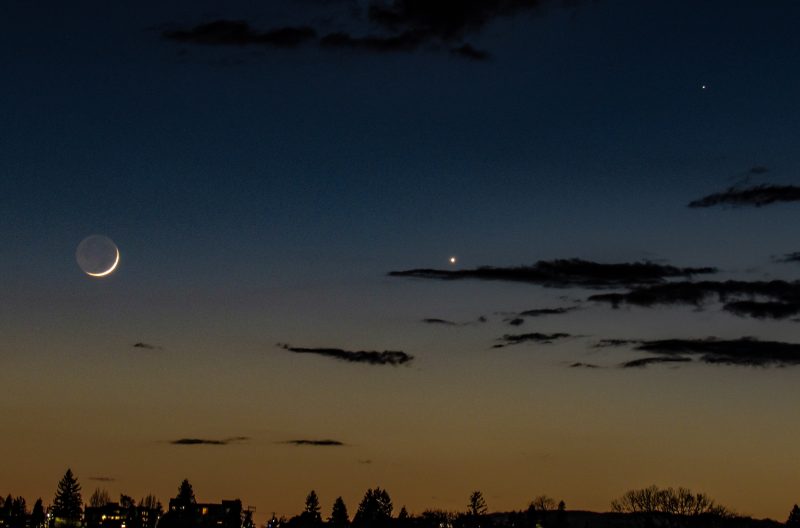 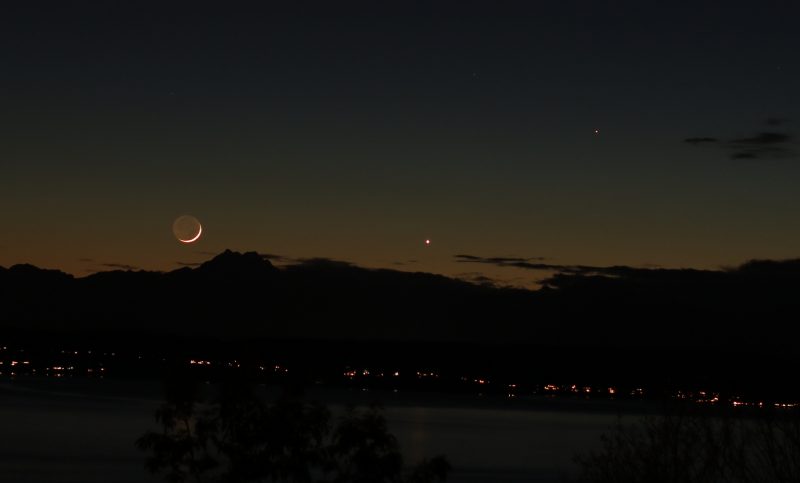 Moon, Venus (middle), Mercury on March 18 by Mike Morrison in Seattle, Washington. He’s looking across Puget sound toward the Olympic mountains. “The peak right below the moon is called The Brothers,” he wrote. 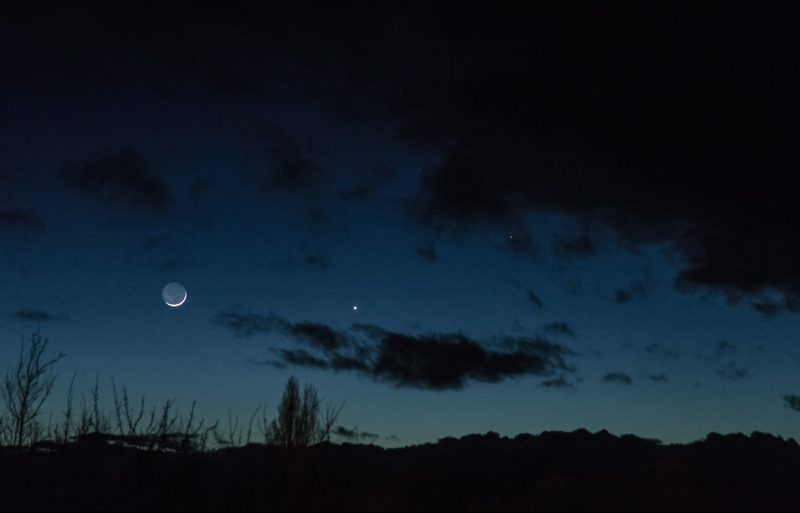 Moon, Venus, Mercury on March 18, 2018, from Richard Hasbrouck in Las Truchas, New Mexico. He wrote, “It snowed hard almost all day, with strong winds. I accepted we’d be seeing ‘nada’ tonight. Then around sunset it started clearing, and all 3 objects became visible. The silhouettes of the cloud banks can be seen at the bottom of the image. A happy surprise after a wild-weather day.” Canon EOS 5DSR, Canon 24-105 mm lens @ 105 mm, hand held ISO 4000, f/4, 1/10 sec, -2 Exp. Comp, Camera RAW.

This animated gif – from Helio C. Vital in Rio de Janeiro, Brazil – shows the moon and Venus setting on March 18, 2018.

The moon is sweeping past Venus and Mercury. Watch for them! Read more. 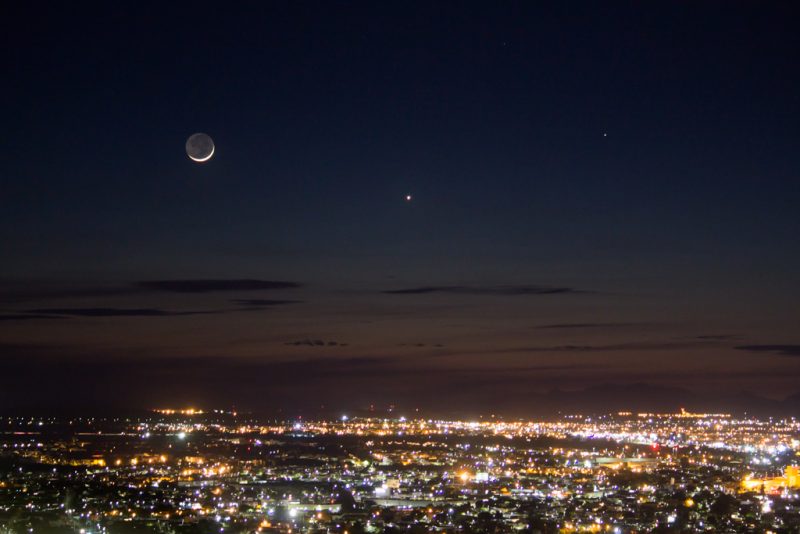 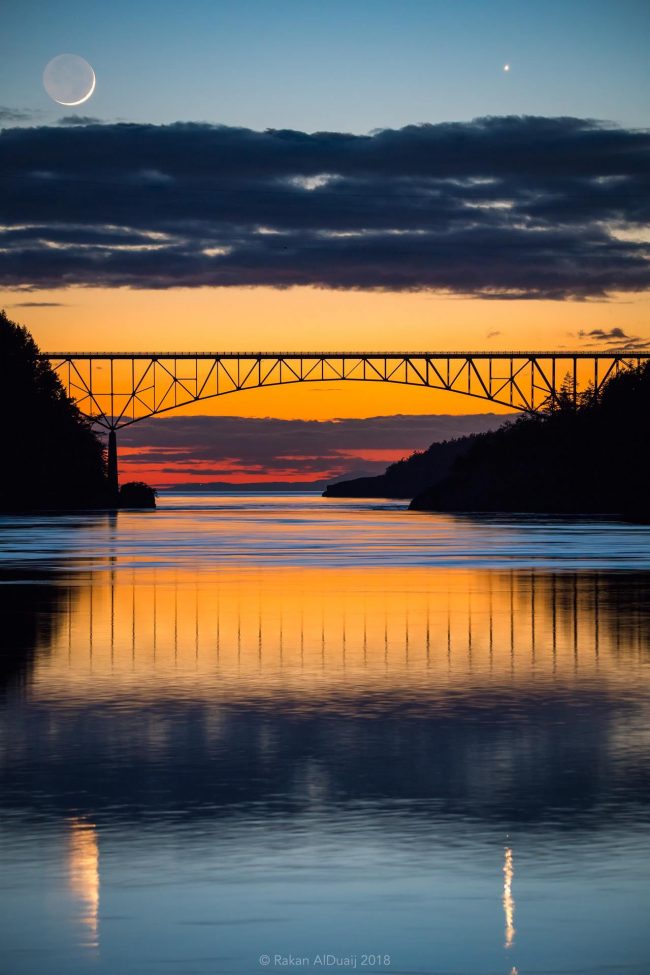 The moon and Venus on March 18 over Deception Pass Bridge in Washington state, from Rakan Alduaij. 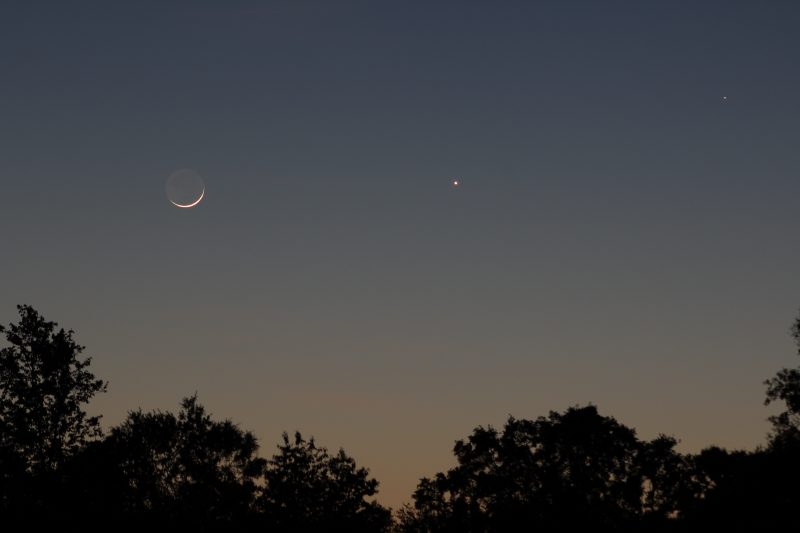 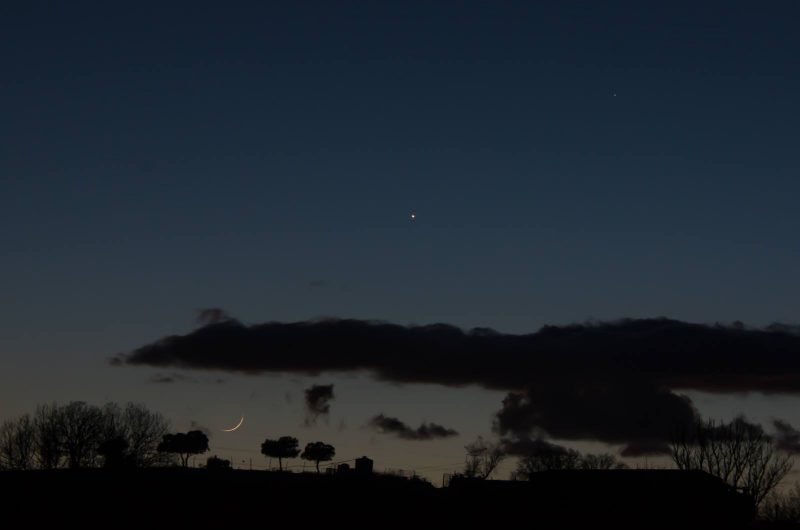 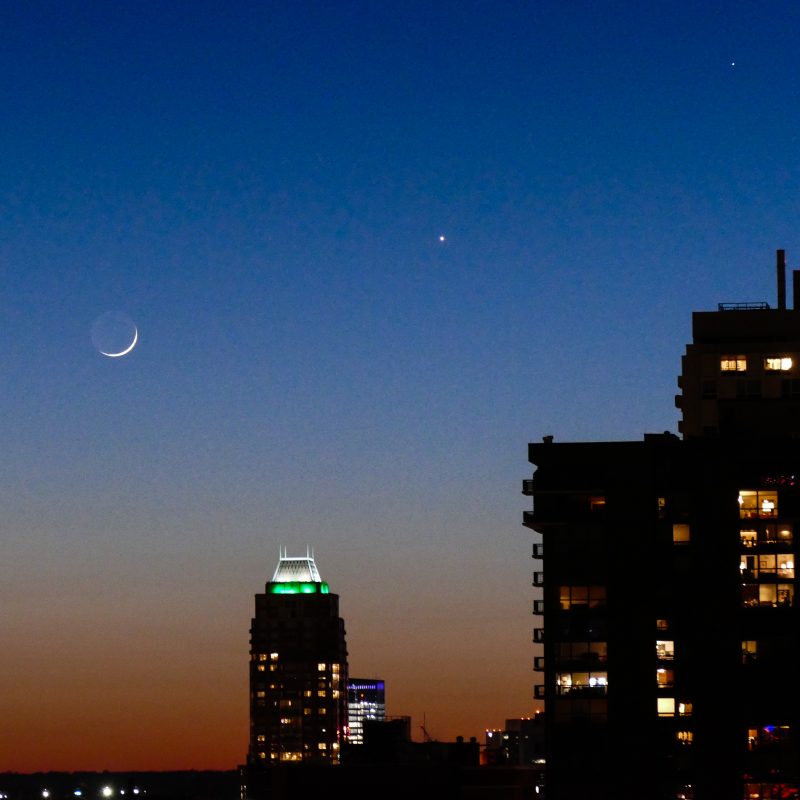 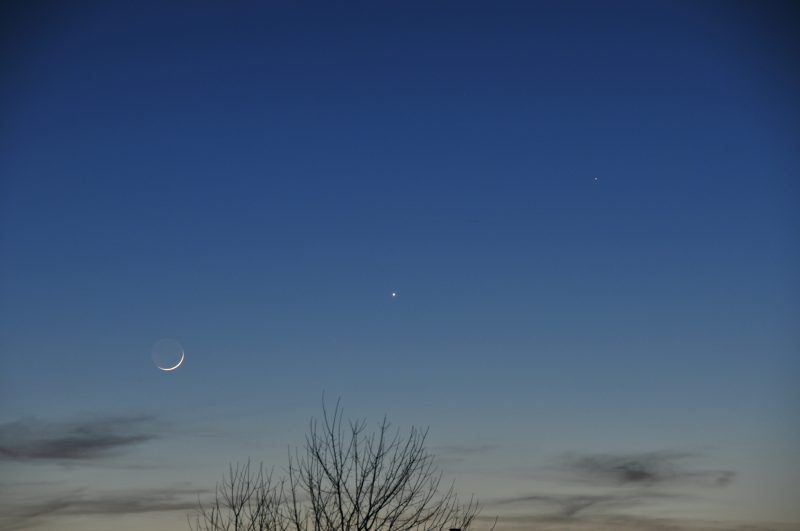 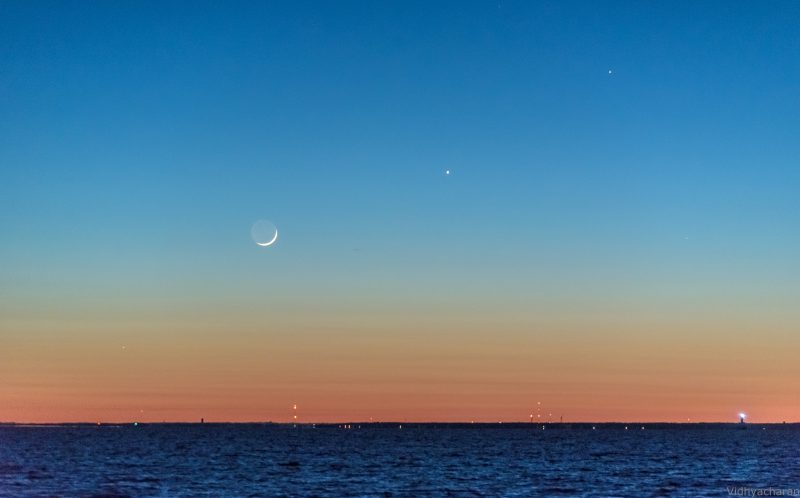 Vidhyacharan HR wrote: “This is a single exposure shot of post-sunset sky from Old Silver Beach in Falmouth, Massachusetts. In the picture, you can see the waxing moon (0.4%), Venus and Mercury along with the Cleveland East Ledge Lighthouse.”

Bottom line: Photos from the EarthSky community of the young moon and planets Venus and Mercury on March 18, 2018.