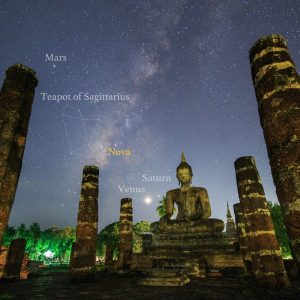 A nova in Sagittarius, discovered a few nights ago by a Japanese amateur, has become bright enough to see in binoculars (? Magnitude 8.0).
I took the photo at the world heritage site Sukhothai, Thailand on October 30th. The Milky Way in Sagittarius is sinking in the southwestern sky right after dusk, affording only a short viewing window. Planet Venus meet Saturn in the fading twilight low above the horizon. Mars is also visible on the left.

Thank you! Your submission has been received!
Oops! Something went wrong while submitting the form.
END_OF_DOCUMENT_TOKEN_TO_BE_REPLACED