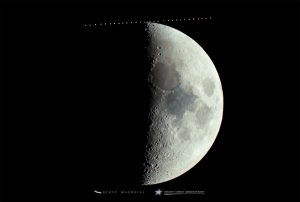 This image shows the progress of the Moon as it grazed past Aldebaran. Though I captured the event on a 10 second interval, this composite shows the occultation at a 1 minute interval. The first capture was at 11:02p ET and the final capture was taken at 11:45p ET.
The Occultation of Aldebaran is not all that uncommon, though last night’s occultation brought the “graze line” to Rhode Island. The Graze Line is a very small geographical line where the Moon will visibly pass Aldebaran on the very edge, allowing for views of mountainous regions along the edge of the lunar disk. Last night was cold in New England, cold! It was 13ºF onsite with 30mph winds that brought the wind chill down to near 0ºF. Myself and a colleague, Ernest Evans, set out into the bitter cold to combat the wind under fabulous skies. Though we were largely successful in our attempt, the wind made for difficult shooting and viewing conditions.

Thank you! Your submission has been received!
Oops! Something went wrong while submitting the form.
END_OF_DOCUMENT_TOKEN_TO_BE_REPLACED