See it! Tuesday’s moon near Aldebaran

Aldebaran represents the fiery red eye of the Bull in the constellation Taurus. Check out these dramatic photos of the moon and Aldebaran close, on Tuesday morning. 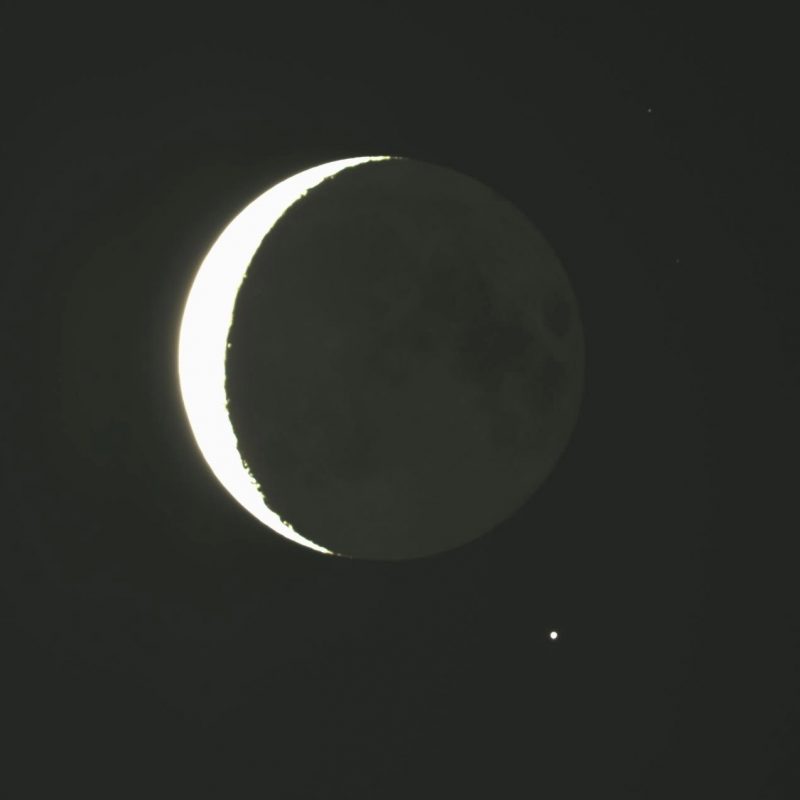 The waning moon and the star Aldebaran on the morning of July 10, 2018, as captured by Steven Bellavia at Cherry Springs State Park, Pennsylvania.

We received several photos throughout the day on Tuesday, July 10, 2018, of the bright star Aldebaran in the constellation Taurus the Bull, near Tuesday morning’s waning moon. Steven Bellavia wrote:

I did not know the moon and Aldebaran were going to be so close. Was it an occultation? It caught me by surprise while I was imaging deep sky objects.

Tuesday’s moon did, in fact, occult – or cover over – Aldebaran as seen from some places around the globe. Indeed, this was the 47th consecutive, monthly occultation of Aldebaran, in a series of 49. Although this occultation wasn’t widely accessible, it might have been seen by some in the Western Great Lakes region from Ontario as far west as North Dakota, Iowa, and southern Manitoba. Writing at SkyandTelescope.com, astronomer Bob King has all the details.

Thanks to all in the EarthSky community who caught this beautiful moon and star, and shared your photos! 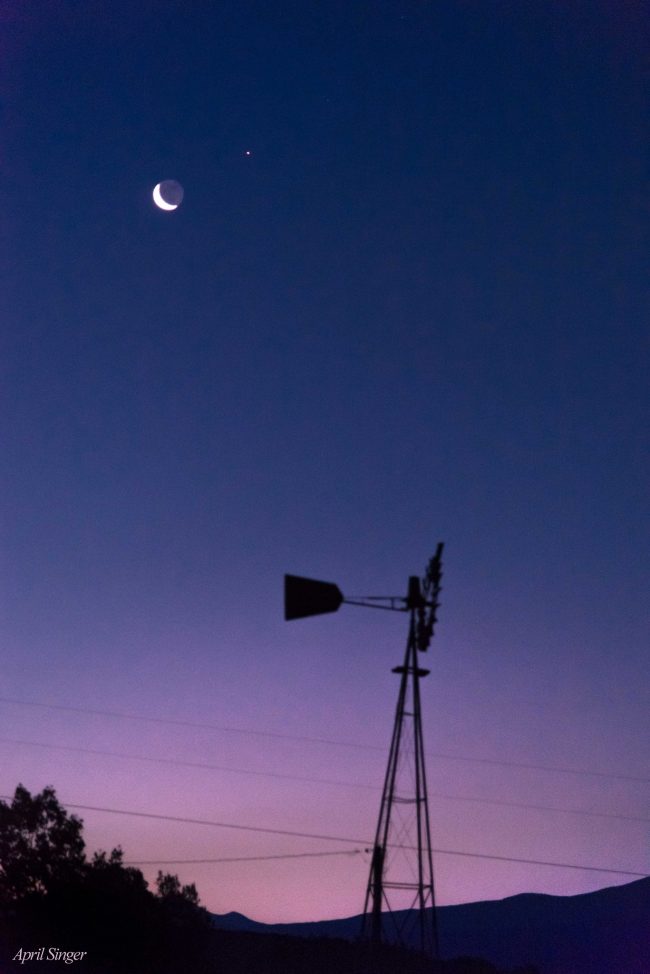 April Singer wrote on July 10, 2018: “I caught this handheld shot of the waning crescent moon with Aldebaran from my car … northern New Mexico, USA, en route to Santa Fe.” 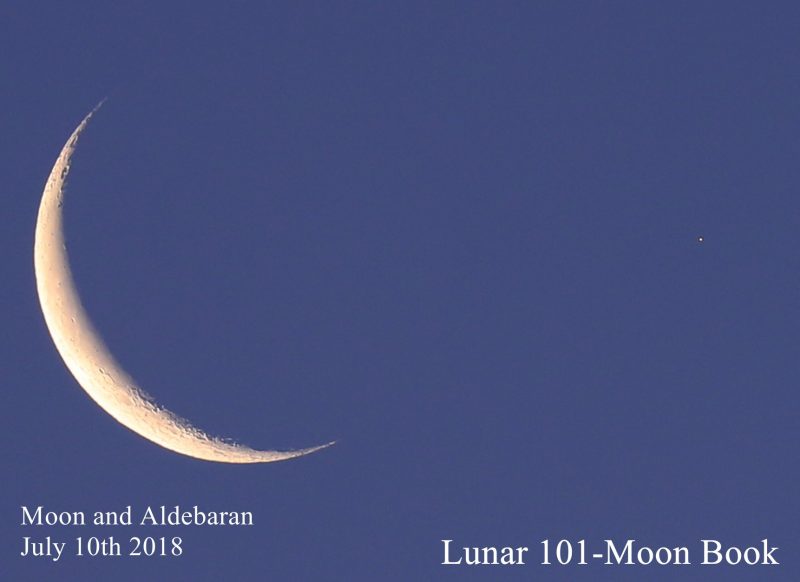 Moon and Aldebaran on July 10, from our friend Lunar101-Moon Book in Toronto. 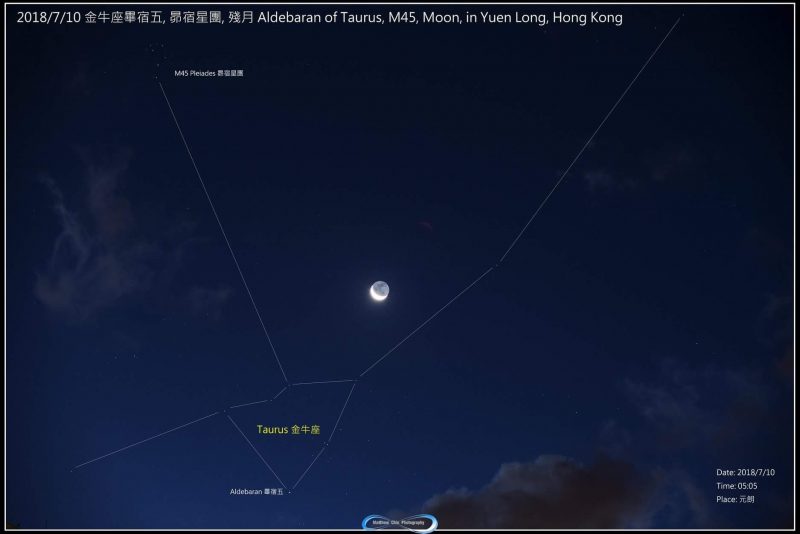 Constellation Taurus, Pleiades star cluster, moon, Aldebaran on July 10, 2018, from Matthew Chin in Hong Kong. Notice how Matthew is seeing the moon much farther from the star from his location. As Earth turned under the sky, carrying the light dawn further and further westward, the moon was moving in its orbit toward Aldebaran. Thanks, Matthew! 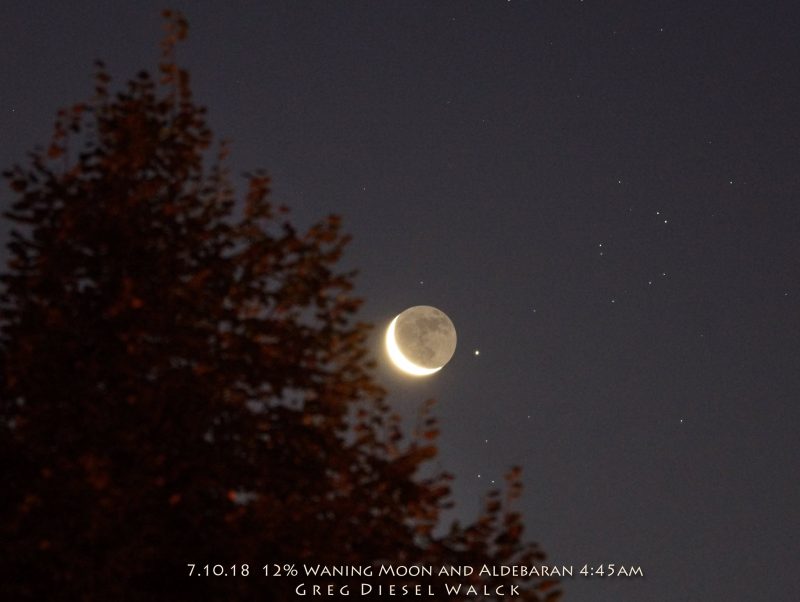 Greg Diesel Walck in the Washington, D.C., area caught the moon and Aldebaran on July 10. He wrote: “Not bad for so close to the city.” :-)

Bottom line: Photos from the EarthSky community of the moon and star Aldebaran on July 10, 2018.