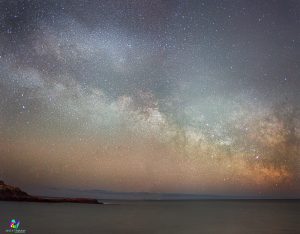 Camera: Nikon D750 with Nikkor 50mm f/1.8
Tripod : Vanguard Photo Alta Pro 263AT with XCSOURCE® Pro ballhead
Post-processing Details
This is a panorama of 6 images. Each image is a blend of 6 images for noise reduction. (total 36 images used)
Images are processed in Lightroom and then stitched together in Photoshop.
Tell us about your image
Milky way is rising over Atlantic ocean. Milky Way core is visible during night time from early February until late October. This particular one was taken in February 2017 around 4:30AM from Sohier Park, York, Maine. Temperature was about 15F with almost no wind and it was a low tide.

Thank you! Your submission has been received!
Oops! Something went wrong while submitting the form.
END_OF_DOCUMENT_TOKEN_TO_BE_REPLACED