Because Earth’s orbit isn’t precisely circular, the size of the sun in our sky changes slightly throughout the year. This image shows that small variation in sun size. 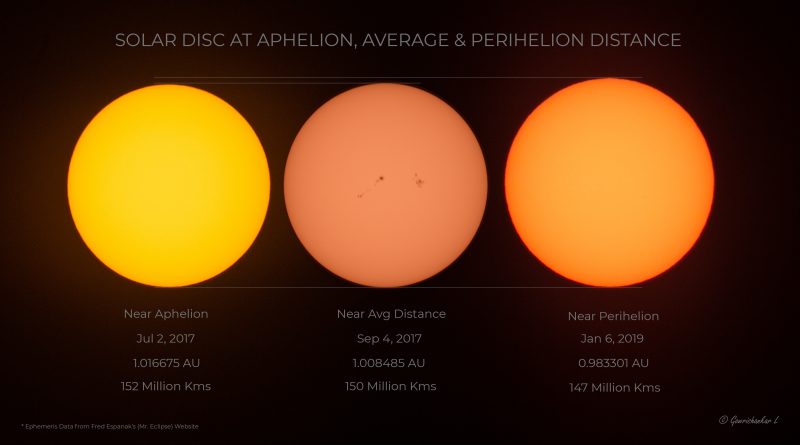 This infographic is from Gowrishankar Lakshminarayanan of New York. He’s comparing the size of the sun’s disk when Earth is at aphelion (farthest point from the sun, every July) and perihelion (closest point to the sun, every January). He wrote:

As you know, Earth was at perihelion on January 3, 2019. I was lucky to do solar imaging over the weekend on January 6 and compare it with solar images I had captured in July 2017, the day before aphelion.

Also, from Fred Espenak’s website, I gathered the ephemeris data to find the months where Earth is at approximately one A.U. – one average Earth-sun distance – and it turns out it’s in the initial weeks of April and September. That average distance should yield the average size of the sun in our sky. I created another comparison chart for the aphelion, perihelion and average-distance sun. I had taken a shot of the solar disk in September 2017 (when the sun was quite active, with many sunspots).

If I keep the aphelion sun as reference, the sun at perihelion is approximately 3.4 percent bigger. Hard to notice but perhaps still significant in the astronomy world.

Bottom line: Composite image showing comparing the size of the sun as seen in Earth’s sky at at aphelion (farthest point from the sun, every July), average distance, and perihelion (closest point to the sun, every January).